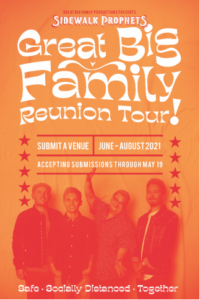 Nashville, Tenn. (April 29, 2021) – Curb | Word Entertainment recording artist Sidewalk Prophets announces the “Great Big Family Reunion” tour, the band’s first in-person tour in over a year, beginning in June 2021. After a successful and innovative year of livestream concerts, with over 35K virtual audience members, due to the COVID-19 pandemic putting restrictions on in-person shows, the “Great Big Family Reunion” tour will encompass the songs and storytelling of the livestream concerts, but will take place live and in-person while following all local and CDC COVID-19 safety guidelines. 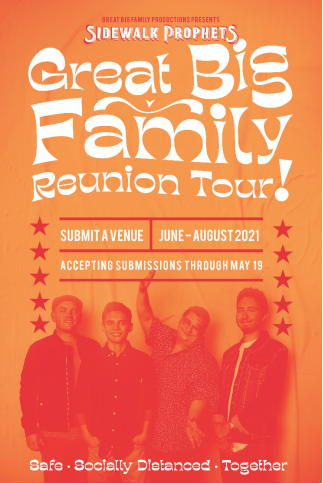 The “Great Big Family Reunion” tour will run from June through August 2021, with show dates being released in groups beginning Thursday, 5/20. Unlike many in-person tours, fans will be able to submit venue recommendations for where they’d like the band to host the show. Venues must be able to hold 500 guests, including any COVID-19 capacity restrictions. Fans can submit venue recommendations until Wednesday, 5/19 at www.sidewalkprophets.com.

“After a year of enjoying playing our livestream concerts and connecting virtually with our fans, we’re excited to be out touring live again and doing it as safely as possible,” shares Sidewalk Prophets front man Dave Frey. “On top of that, we’re excited to give fans the chance to submit their venues to be considered to host the tour. We can’t wait!”

About Sidewalk Prophets
With a career spanning three major label studio releases—These Simple Truths (2009), Live Like That (2012) and Something Different (2015), plus 2013’s celebrated holiday offering, Merry Christmas To You—and multiple hits, including Gold-certified “The Words I Would Say,” “You Love Me Anyway” and “Live Like That,” among others, Sidewalk Prophets remains a mainstay at Christian radio. The Dove Award-winning band has more than 228 million career on-demand streams, sold more than 913,000 in equivalent album sales, and 1.88 million digital tracks. In addition, the group has garnered five No. 1 songs, nine Top 5 radio singles and more than 52.3 million views on YouTube. The band originally formed at Indiana’s Anderson University, and since signing with Curb | Word Entertainment, they’ve been nominated for a Billboard Music Award, multiple K-LOVE Fan Awards and four Dove Awards, taking home the New Artist of the Year Dove in 2010. Over the course of their career, they’ve played for more than 2.5 million fans, and counting. Known for spending more days on the road than anywhere else, Sidewalk Prophets’ most recent tours have morphed into interactive experiences for their fans, whom they affectionately call “The Great Big Family.” The band hosted the first free public concert in Ryman history on Mar. 22, 2020, previewing new music from their highly-anticipated album, The Things That Got Us Here, available now.