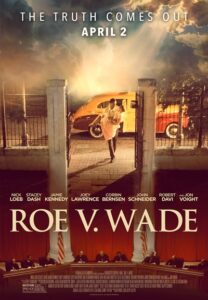 The topic of abortion is one that has caused division amongst different groups of people for decades. Roe V. Wade is a film that offers insight into the pro-life/-pro-choice debate by showing a side seldom seen in the maintstream media.

We see protests and voices loudly calling for abortions to be made legal, medical professionals are pressured into believing it would be a steady source of income and notoriety. While pro-life supporters plead the case for the lives of unborn babies, many pro-choice lobbyists see dollar signs.

Dr. Bernard Nathanson reluctantly became one of the leaders of the pro-abortion movement after a tragic personal experience. Years later, he starts to rethink his choices and begins revealing what he saw and participated in.

Arguments of when life truly starts, reasons to rationalize abortion and the rights of women are all brought to light as we hear the strong opinions of both sides.

When the vote to legalize abortion is 4-3 in favor, Chief Justice Warren Burger calls for a rearguing of the Roe V. Wade case with the vote to reargue being 6-1 in favor of further examining the case. Corruption & blackmail within the Supreme Court among the judges later leads to misuse of power.

Throughout the film, the we see how the pro-abortion movement begins to fall apart as several people who were once prominent members question their decisions and morals. Elsewhere Bernard argues with God, fighting his own battle inside. Once the invention of ultrasound technology is introduced, he reaches a turning point that drastically changes his perspective.

Roe V. Wade gives viewers much to think on and spark conversations about after seeing the story play out. With the evidence presented throughout the film, it provides the opportunity to hear many details allowing you to make an informed decision on where you stand on the topic of abortion.

Roe V. Wade is now available on Digital and Video On Demand. Coming to DVD May 3.