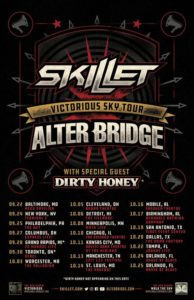 Nashville, Tenn. (Jun. 24, 2019) – ALTER BRIDGE and SKILLET have announced that they will embark on a co-headline tour this fall. The Victorious Sky Tour kicks off on September 22 in Baltimore and runs through October 25 in Orlando. Dirty Honey will also appear. All confirmed dates are below.

Multi-platinum and twice Grammy-nominated supergroup Skillet were recently welcomed into Pandora’s Billionaires club, clocking over 2 billion streams. They will release their tenth album, Victorious, on Atlantic Records on August 2.

For over 15 years, Alter Bridge have been known for blurring the line between hard rock and heavy metal. Building upon the sound that has won the band worldwide critical acclaim and a devoted global fan base, the band returns with their sixth studio album, Walk The Sky, out October 18 via Napalm Records.

ABOUT SKILLET:
One of the best-selling rock bands of the 21st century, two-time GRAMMY® Award-nominated multiplatinum Wisconsin quartet Skillet—John Cooper [lead vocals/bass], Korey Cooper [guitar/keys], Jen Ledger [drums/vocals], and Seth Morrison [lead guitar]—write the soundtrack to triumph. An undying spirit humbly asserted and affirmed the band as one of this generation’s most successful rock acts. However, as all classic underdog stories do, it happened quietly under the radar. By 2019, they not only garnered a pair of GRAMMY® Award nods and sold over 12 million albums worldwide, but they also took home a Billboard Music Award for the double-platinum Awake and were welcomed into Pandora’s Billionaires club after clocking over 2 billion streams. Its breakout single “Monster” remains “one of the most-streamed rock songs of all-time” with 285 global audio streams. 2016’s Unleashed bowed at #3 on the Billboard Top 200. Going #1 on Rock Radio, the lead single “Feel Invincible” cracked 150 million global audio streams and went platinum. Meanwhile, the gold-certified Unleashed became their fourth consecutive album to receive either a gold, platinum, or double-platinum. To date, nine original tunes earned RIAA recognition in tandem with high-profile syncs by everyone from WWE and Marvel to ESPN and NFL. Between selling out arenas on four continents, the group performed on CONAN and graced the pages of USA Today and New York Times, to name a few. In 2018 alone, the band clocked 1 billion streams. This momentum continues on their 2019 tenth full-length, Victorious. With the bulk produced by Korey and John, it lives up to its name for Skillet as their most triumphant body of work yet.

ABOUT ALTER BRIDGE:
Alter Bridge burst onto the music scene in 2004 with the release of their gold-selling debut, One Day Remains. In 2007, the band released Blackbird, the album that elevated the band’s profile worldwide. The epic solo in the title track “Blackbird” was voted “Greatest Guitar Solo Of All Time” by Guitarist Magazine. ABIII was released in 2010 and the single “Isolation” gave the band their first #1 single. In 2013, the band reached an elevated creative and critical plateau with Fortress. It bowed at #12 on the Billboard Top 200, moving over 30,000 copies first-week and earning unanimous tastemaker praise. The record garnered perfect scores from Total Guitar and KERRANG! as well as acclaim from Billboard, The Guardian, Loudwire, Ultimate Guitar, and many more. In between sold out tours in Europe and North America, the guys appeared on VH1 and graced the cover of Classic Rock Magazine who labeled Fortress, “The best thing they’ve ever done,” while Eddie Trunk called it, “A top 10 album of the last 10 years.” 2016’s The Last Hero gave the band their first Top 10 album since their debut. Alter Bridge has appeared on The Tonight Show and Jimmy Kimmel Live and their music has been used by the WWE, Major League Baseball and NASCAR to name a few. The band recently released the video and audio of their career highlight, Live At The Royal Albert Hall, featuring Alter Bridge backed by the 52-piece Parallax Orchestra led by conductor Simon Dobson.