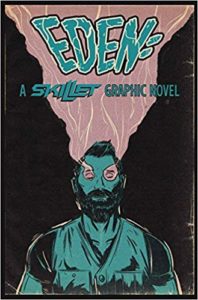 As a lifelong fan of superheroes, stories of good overcoming evil and an ever growing appreciation for the art, writing and creativity that goes into comic books with an eclectic cast of characters and the worlds they live in, I was thrilled to hear that Skillet would be releasing their first comic book this summer! Even more so when we received an advance copy to read and review! Knowing that the band’s lead singer, John Cooper, is also a huge comic fanatic and that he’d be writing this graphic novel along with Random Shock made me all the more curious to see what the finished product would be.

Eden: A Skillet Graphic Novel delivers action, heart, a dash of humor, intriguing characters (the main ones based on Skillet band members John, his wife Korey Cooper, Seth Morrison and Jen Ledger) and some twists & surprises along the way.

Set in the town of Coltonville, TN, a tight knit community has fortified themselves after a disaster that nearly ended civilization as we know it. The townsfolk take turns patrolling the perimeter of their area in an effort to prevent the monsters lurking outside from getting through the walls they’ve built up. Amongst them, the characters of John & Korey Cooper serve to protect not only their neighbors, but their two young children. There’s a bit of mystery surrounding John & Korey as they stand out in their community on account of the purple glow that emanates from their eyes, the cause of which is unknown both to the couple and those around them.

When a band of strangers who call themselves the Lilac Lodge claiming to be missionaries show up at the town’s gate, the guard on duty is shocked to see that a few of the people in this group share the same oddly glowing eyes as the Coopers. When John & Korey meet the Lilac Lodge, they are just as confused and concerned when this group insists that their eyes and the source of the glow make them the “chosen” few and that they’re connected in more ways than one. Among the strangers are two who are not “chosen”, but travel with the group in hopes of one day becoming like them. Seth & Jen are what some would call misfits or outcasts, each having been dealt their own set of hardships.

Throughout the book, we see that the Lilac Lodge and their motives are not as pure as they first presented themselves to be. As the story unfolds, John & Korey begin to form somewhat of a bond with Seth & Jen teaming up to face the penultimate battle of the story together, each becoming stronger in many ways. Lessons of honesty, sacrifice, remaining firm in your beliefs and standing up for those you care about, as well as those you don’t know who are in need are learned and the importance of discovering the truth is an overarching theme.

With cool artwork accompanying a story that draws you in and characters you want to cheer on, Eden: A Skillet Graphic Novel is a worthwhile read. I will warn that the content is a little heavy at times and a few of the art panels may make younger readers uncomfortable. My personal opinion is that it is most suited for teens & adults, but parents use your judgement and have a look through the book yourself before sharing with the younger kids. Overall, I think Skillet fans and comic book fans in general will be pleased with this release!