Book Review ‘The Elijah Chronicles: On the Mountain of the Lord’ and ‘The Threshing Floor’ 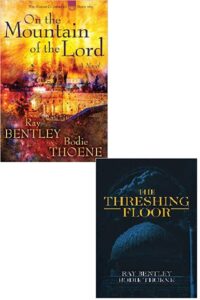 Israel. Jerusalem. Zion. Each word representing a promise made by God to His chosen people, yet loaded words that carry so much meaning to this day. Swear words on the lips of those who hate them, blessings of joy and peace for all who love God and His beloved. Ancient prophecy, current events, and future wars come together in ways foretold before man could imagine such things. It is of such things that the books of “The Elijah Chronicles” speak. Ray Bentley and Bodie Thoene combine their respective talents (prophetic exposition and historical fiction-writing, respectively) to weave a narrative thread through an exposition of Biblical history and prophecy.

On The Mountain of the Lord introduces us to Jack Garrison, a professor employed with a far left think tank that dispatches him to Israel on a fact-finding mission to uncover details about the settlement situation in Israel. Instead, what Garrison finds is more than he could have imagined; an unknown heritage, visions of the past (accompanied by the prophet Elijah as his guide) and revelations about the future that have a profound effect on his view of the Bible, God, and Israel’s destiny. He also faces multiple attempts on his life and struggles with lingering grief, even as new love begins to blossom.

The Threshing Floor continues Jack’s story. Having left the think tank, he now, with the help of friends and family, uncovers his family history and that of his new “friend”, Bette Deekman, whose tragic past has left her afraid to risk loving and losing again. The threats on their lives continue as Jack and Bette attempt to cut through the propaganda and outright lies to understand and explain Israel’s God-given right to exist and defend itself.

I found both books to present an accurate account (based on what I have heard of the matter from trusted sources) of the anti-Israel bias (and flawed logic) which continues to spread throughout the world via media channels, political venues, even religious outlets. The depictions of Biblical and extra-Biblical events in Israel’s history, as seen in Jack’s visions, are well chosen to make the case for Israel and Jerusalem’s historical claim on the land. The main characters are likeable and, while by no means perfect, are clearly seeking with open hearts.

However, the journey lags in some places, when the story seems to take a back seat to the talking points of people on both sides. Historical details and prophetic tidbits, while fascinating in their own right, aren’t revealed as naturally as one might wish from a story. I also found the adversaries to be somewhat one-dimensional representatives of their respective viewpoints. (For one in particular, seemingly every word out of her mouth reads more like an angry Twitter feed than a normal conversation.)

If you enjoy Jonathan Cahn’s books, you’ll appreciate The Elijah Chronicles for its historical forthrightness and Biblical worldview presented through a combination of self-discovery and prophetic visions. If you’re looking for a thriller novel, or a romance, or a historical drama, you might find these stories a little slow. If your interest leans toward non-fiction, you might find yourself skipping past the plot altogether to uncover the historical tidbits. “The Elijah Chronicles” has the potential to offer the best of all three, but doesn’t quite climb the mountain to its summit. You’ll have to separate the wheat (what piques your interest) from the chaff (what doesn’t) yourself.

Publisher: On The Mountain of The Lord – Salem Books
The Threshing Floor – Maranatha Publishing