Book Review: The Legend of George Jones: His Life and Death

Home/Reviews/Book/Book Review: The Legend of George Jones: His Life and Death
Previous Next

Book Review: The Legend of George Jones: His Life and Death 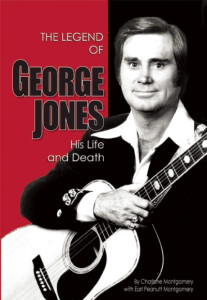 George Jones is a name known to many throughout the music world and beyond. Some remember him as a pioneer of country music having recorded some of the biggest songs of all-time including the incredibly successful, “He Stopped Loving Her Today”. There are others who remember him less fondly as a man who spent most of his life battling the demons of addiction. That battle is one that was fought in both his life in the public eye as well as within his off stage relationships. Still, there are those who respectfully remember him as a dear friend. The Legend of George Jones: His Life and Death was written by two such people. Charlene Montgomery & her husband, Earl “Peanutt” Montgomery, spent several years with George sharing not only in the career highs with Peanutt having had a hand in writing many hits for George as well as other country legends, they also witnessed the lows as George waged war with his addiction & times when he was not someone many wanted to be around. In The Legend of George Jones: His Life and Death, Charlene & Peanutt share these fond memories and the more difficult times they experienced as they tell the story of their friendship with the embattled star.

From George Jones’ humble beginnings as one of eight children in a small East Texas town in the time of The Great Depression, to his rise to fame and his status as a Country Music Hall of Fame member, this book gives you a glimpse into the life of this country music icon and a side of him not many knew. We read of how a young George Jones would play his guitar and sing on the streets of Beaumont, TX for anyone who would listen strictly for the enjoyment it brought him.

The book also tells of how George met Peanutt Montgomery and the camaraderie they shared. The two became close as brothers sharing similar backgrounds and love for music – George singing & performing and Peanutt penning songs recorded by several country music legends including George. The pair also shared the battle with the bottle leading to many unpredictable situations for those around them. Peanutt’s wife and the main author of this book, Charlene, also traveled with the men as George toured with Peanutt’s sister, country singer Melba Montgomery. Charlene shares of the power alcohol had over her husband and all of the times he and George were drinking buddies. That is until the day Peanutt met Someone whose power was greater than the alcohol. When he became a Christian, everything changed and he gave up his drinking & smoking and became the man Charlene always knew he was inside.

We read of the different relationships George had over the years including his highly public marriage to his third wife & fellow country artist Tammy Wynette with whom he recorded several songs and toured throughout their time together. Readers get a glimpse into Tammy’s background of her life before George as well as the music, love and troubles they shared as a couple. The book journeys deep into the darkness that surrounded George when he was under the influence of cocaine. Even to the point where he attempted to kill Peanutt while high. We read of many career struggles George experienced at the hand of trusting the wrong people. Through it all, the author remains adamant that George was a caring person at heart and recognizes that those who truly did take advantage of him and cheated him will ultimately have to stand in front of God and answer for the things they did, as everyone will.

In my opinion, from a technical standpoint, this book has its weaknesses with a few editing/grammatical errors as well as the style in which the stories are told. Aside from those minor flaws, it is interesting to read through, especially for those who are familiar with the careers of George Jones, Tammy Wynette & the names of those who worked closely with them.

Links for The Legend of George Jones:His Life and Death: