Film Review: ‘God’s Not Dead: A Light In Darkness’ 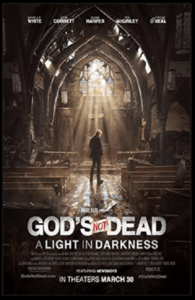 In a culture where it seems that everything stirs up controversy, especially when topics such as religion and politics come up and divide so many, God’s Not Dead: A Light In Darkness sets out to inspire hope and attempt to bridge the gaps.

The movie adds another chapter to the story of the first two films picking up where the previous one left off with Reverend Dave being released from jail and attempting to continue his ministry in the decades old church that his father pastored before him. He is confronted by many who feel there’s no place for a church or such public displays of Christianity on a state college campus. Vandalism, protesters and tragedy test the faith of the believers struggling to remain strong.

While coping with a difficult loss, Dave is faced with the task of trying to keep the church from being demolished. He is forced to reconnect with his brother, Pearce, a social injustice attorney whom he hasn’t spoken to in years in an effort to save the church. Through working on the case, Pearce & Dave open the lines of communication that have long been closed.

Adam & Keaton are two college students with many questions & doubts as they try to navigate their faith and determine exactly what they believe. Their stories play a vital role in the main plot of the film. Campus minister Josh is a source of encouragement and strong example of faith to everyone he comes in contact with.

Throughout the movie, we see good & bad examples of people and the way they handle things on both sides of the issue at hand, each going to extreme measures to prove their points.

A powerful, timely story of forgiveness and love brings together even the most unlikely people as they strive to move forward in understanding one another. While my words may fall short in capturing the magnitude of the message God’s Not Dead: A Light In Darkness carries, I highly encourage you to experience the film for yourself and allow God to touch your life and inspire your faith through it.

Links for God’s Not Dead: A Light In Darkness: