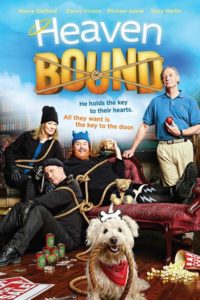 There are times in life when we all take something for granted. Whether it’s the roof over our head, the luxuries of electricity & running water or the relationships we’re blessed with, sometimes we need to take a step back and realize the value of the time we’re given and what will truly make a difference when all is said and done.

Ted & Josie are a married couple who were used to a high standard of living with no need to want for anything. However, when Ted loses his well-paying job at an upscale dog food company after an accident involving the company’s beloved mascot, he and Josie must try to readjust as their funds dwindle.

One day while Josie was working, her wealthy, widowed boss, Dr. Drake, tells her he plans to sell his wife’s jewelry collection. With bills going unpaid and no clear sign of things changing any time soon, Josie devises a scheme to turn their financial situation around. She tells Ted they should break into Dr. Drake’s house to steal the jewelry before it’s sold. Josie’s brother, Moochie, overhears this and is determined to be involved.

When plans are put into motion, Ted, Josie & Moochie are met by unexpected obstacles that not only hinder their ability to achieve the desired outcome, but also challenge them to consider their motives and priorities.

In between the hijinks and comedy, the heart of Heaven Bound is a story that focuses on what’s really important. The characters experience lessons in love, grace & forgiveness that lead them to a more fulfilling life than they could have imagined. These lessons are also something that viewers watching are able to put into practice in their lives as well.