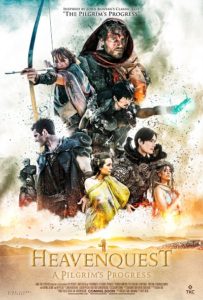 As an inspired prequel to the Christian literary classic by John Bunyan, The Pilgrim’s Progress, Heavenquest tells the adventurous tale of a man charged with making the decision to continue serving under the cruel rule of a dictatorship consumed with dark power or to risk all that he has come to know and accept as truth to seek after the light of a far off world that he has only heard of and seen through visions.

In a war ravaged realm where the southern kingdom is ruled by a tyrant king and people have only dreamed of the peace they’ve been told exists in the northern kingdom, a man named Vangel embarks on a journey to find the northern kingdom for himself. Along the way he meets a cast of characters each with their own agendas – some with good intentions, others only out to further spread the evil king’s regime.

When Vangel meets a mysterious man called Elder who tells him a prophecy of five men who would prepare the way for the King of the North to return and unite the northern & southern kingdoms once more…and that Vangel is one of these five. Elder gives Vangel & his traveling companion, Bandy, The Record of Ancients to help guide them on their path to find this King of the North they’ve learned about.

Vangel & Bandy must traverse through dangerous lands on the way that test their physical and spiritual fortitude beyond bearable limits with no guarantee of survival. When the way becomes more treacherous, Brandy abandons Vangel in an effort to save himself. In addition to Elder, a woman named Ezera proves to be a strong ally as she fights to protect Vangel.

During a pivotal battle (and my personal favorite scene) where Vangel, Ezera & Elder are faced with their worst enemies, a prayer is answered as a hero emerges to aid in the victory. With one journey reaching its end, another just begins for Vangel as he accepts his duty to the King of the North.

Whether you are familiar with the story of The Pilgrim’s Progress or not, Heavenquest‘s live action take on the classic brings the timely messages to life as it depicts the trials and difficult decisions we face as Christians choosing to follow Jesus and discover the mystery of God. The film score is fantastic and provides the perfect backdrop as the scenes unfold. A few on screen events may be a little intense for younger viewers, but overall if you and your family enjoy action, adventure & fantasy films, add this to your list to watch! On October 25th & 26th, viewers have the opportunity to purchase tickets for $5 to watch the digital premiere of Heavenquest through the film’s official site: https://www.heavenquestfilm.com/

Links for Heavenquest: A Pilgrim’s Progress: