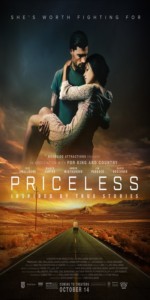 Every now and then, a movie comes along that faces tough issues head on to bring attention & awareness to actions that shouldn’t exist in our society in a way that touches the lives of viewers, stirring something within them to want to help make a difference. Inspired by true stories and brought to life in association with award-winning music group For King & Country, Priceless does just that, and does it well.

James Stevens is a man who suffers a devastating loss. He finds it hard to function as he struggles to maintain a regular job and keep his life on the straight & narrow.  In desperation, he accepts an offer to drive a truck transporting unknown cargo from point A to point B. He is told never to ask what he is hauling, just to drive.

After a near accident, he hears noises coming from inside the trailer. When James opens the door, he is horrified to discover two women huddling together, frightened. He tells them they can ride up front & he stops at a gas station so they can get cleaned up. At this point, the only words they have spoken to James have been in Spanish. One of the women suggests to the other that he seems like a good man.

James stops at a diner so he and the women can eat. There he discovers they both speak English and he learns they are sisters, Antonia & Maria, who must work to help their father pay rent. They are under the impression that they are coming to America to clean houses and do other types of honest work.

Back on the road, Antonia notices James’ tattoos bearing a message of faith. She asks him about it and he reveals that his faith has been shaken over the years and he isn’t sure if he believes any more. She encourages him to keep hope and tells him she will pray for him.

Upon arriving at the destination, James meets two men and a woman who take the sisters away in a van. James realizes he delivered the women into a heartbreaking situation. Antonia & Maria are seen being taken to a house where several other women are being held as escorts who are drugged and left alone with men.

With the assistance of hotel owner Dale, who has his own reasons for wanting to see this terrible exploitation and treatment of women come to an end, James is determined to shut down this human trafficking & prostitution ring.

Dale is a man of faith who encourages James not to give up on his mission after a few setbacks. Through this conversation and remembering Antonia’s faith, James is inspired to continue on and refuses to let anything stop him from rescuing Antonia & Maria.

At a penultimate moment, James is faced with a difficult decision between what is right & what his feelings tell him to do in a test of his faith & integrity. In the end, we see a turn-around not only in James’ life, but in the lives of Antonia, Maria and several other women who were held captive in the prostitution ring. James & Antonia devote their life to helping women flee from that lifestyle through sharing their story and providing a way out for them.

With its message of hope carrying throughout, strong performances by the actors & a gripping, well-written story; Priceless is a captivating viewing experience from start to finish.