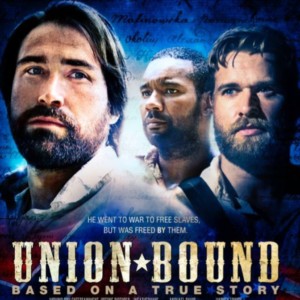 In a time of America’s history when the country was divided between the North & South, battle raged over the practice of slavery with one side supporting the right to own slaves and the other opposing it as they fought for the abolishment of slavery all together.

Set in 1864 during the Civil War, Union Bound follows the story of Union soldiers taken prisoner by the Confederacy.  Based on the pages of Union soldier Joseph Hoover’s diary, the film tells the experiences that he & fellow prisoner of war, Thomas J. Ryan faced as they attempt to return to the North.

Joseph is portrayed as a man with morals & a good heart looking out for others. Tom is a scheming, free spirited soldier with good intentions.

While on the run, Joseph & Tom seek shelter on a plantation as they’re taken in by a family of slaves who had been working there. Finding kindness in an unexpected place, Joseph chooses to trust one of the family members who offers to show Tom & Joseph a way to continue making their way back up north. While on their journey, the men become acquainted with a varied cast of characters who show the men both kindness & betrayal. In each situation, Joseph maintains his integrity. One character chooses to put his life on the line in order to help Joseph & Tom.  Elements of faith & hope weave throughout the story as we witness the hardships & triumphs of these men.

The cinematography is very well done adding to the touching story. Overall, the film is well written and acted with the talented cast bringing these characters to life.