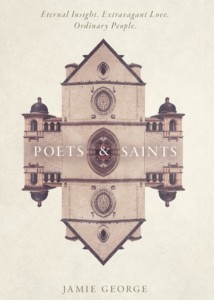 As Christians, we hear the hallowed names of the seekers and followers who have gone before us. To some of us, they are just names; people who lived and died ages ago, and somewhere in between, managed to leave enough of a legacy behind to be remembered. To others, they are great heroes of the faith; extraordinary individuals more myth than reality, whose lives exemplified surrender and devotion, ideals we can only hope to emulate. Still others may scoff, preferring to focus on their shortcomings and idiosyncrasies rather than any of their merits, as though the former canceled out the latter.

Rather than looking away from, up to, or down on these individuals, Poets and Saints (the companion book to the album of the same name by All Sons and Daughters – there’s also a video curriculum shot on location) encourages us to see God in the lives of these personages. He is the one who brought beauty and meaning to their lives, who cultivated them like a fragile flower in His garden, and He can do the same for us. The book follows its author, Jamie George, along with a cadre of  his colleagues and family, including Leslie Jordan and David Leonard (of All Sons and Daughters fame) and his daughter and twin sons, as they travel throughout Europe in search of the stories of these church luminaries, and perhaps the first whispers of our own.

The book winds its way through church history, weaving in and out of time with each chapter. In it, we encounter:

* St. Patrick, who discovered a passion for the people of Ireland, land of his forced exile, returning by choice to serve them. In him, we see the value of understanding and loving people where they are instead of trying to change them first.

* William Cowper and John Newton, whose troubled lives coincided, bearing witness to the power of friendship and encouragement. They teach us how to redeem our pain and find freedom within our restrictions to create things of beauty.

* C. S. Lewis, famous for his Narnia books and works of theological insight. No stranger to sorrow, his life demonstrates what we can become when we bare our inmost fears, wounds and longings.

* George Macdonald, who didn’t let rejection define him, but instead found another outlet for his desire to teach spiritual concepts; literature. Unbothered by the cares of life, he is an example of gratitude, joy, and purpose revealing itself through pain.

* St. Thérèse of Lisieux, who, despite her brief sojourn on Earth, nevertheless became a model of love and simplicity. Her legacy lives on, assuring us that we can still live a life of meaning without grand accomplishments.

* The voice of architecture. A brief pause in the midst of story and legend to gaze upon the unspoken evidence of God’s greatness, as revealed in beauty and sadness. Our lives become complete when we embrace the pain that so often accompanies joy.

* John Calvin, remembered by many for his controversial interpretations more often than his passion for worship and unity in the church. He is at once a byword of the consequences of misdirected fervor and a voice of dissatisfaction with the dearth of holiness in our lives which is bred by worldly temptations.

* St. Augustine of Hippo, a scholar and sensualist, whose unsatisfied longings led him from a life of self-indulgence to the feet of Jesus. He found fulfillment in Christ, and so can we, if we realize that nothing in this world can satisfy our deepest needs.

* St. Francis of Assisi, whose adversarial relationship with his father and rebellious nature conspired to bring about his humiliation, an experience which taught him the value of personal poverty and service. We would do well to follow his example of self-denial and compassion.

* St. Peter, remembered today for his faith and fear on the stormy waves of the sea of Galilee. We see both sides of our relationship with God in him; childlike trust and distracted doubt, with the promise that God walks alongside us in every circumstance.

* Martin Luther, father of a church movement and zealous crusader against church corruption and exploitation. His story reminds us to be courageous and firm in our faith, boldly defying those who would abuse the truth of God for their own benefit, caring nothing for our own reputations.

Though we may be daunted at first by the very mention of these famous names, upon investigating their motivations and struggles, they step down from their pedestals and walk among us. Perhaps we even see our own faces reflected in their stories, either what we could have become or what we ought to be. While reading Poets and Saints, I found myself thinking I would enjoy reading a novel based upon some of their lives, particularly St. Patrick. I also was left wishing there might be a second project along these lines, continuing to bring us these powerful tales of men and women whose lives were at once ordinary and extraordinary. Poets And Saints encourages us to follow the example of these imperfect people whose lives and worlds were irrevocably transformed by their faith in God.