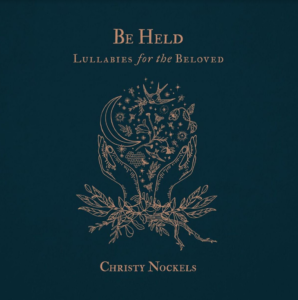 Nashville, Tenn. (Sept. 1, 2017) – Singer-songwriter/worship leader Christy Nockels announces the release of her upcoming album, Be Held – Lullabies For The Beloved, set to release September 29. The three-time GMA Dove Award-winner’s newest compilation of songs contains both familiar melodies as well as original works penned by Nockels, and produced by husband and musical partner, Nathan.

“I’m so overjoyed to be able to present Be Held – Lullabies For The Beloved,” says Nockels. “This album comes from a deep desire to impart and share what God breathed into me so many years ago, instilling in me an awareness of my beloved-ness that I have never forgotten.”

A collection of 15 songs that began as lullabies sung over her own children, the songs  are intended to soothe and uplift parent and child alike.

“The heart behind Be Held – Lullabies For The Beloved is that a new mother can sing these songs over her newborn baby but in the very same breath, find herself sung over by her Heavenly Father (Zephaniah 3:17),” Nockels shares.

Having recently relocated to Franklin, Tenn. with husband and producer Nathan, along with their three children, Be Held – Lullabies For the Beloved follows the release of her recent worship single, “Build My Life.”

Be Held – Lullabies For The Beloved Track Listing

About Christy Nockels:
Christy Nockels is a worship leader/singer-songwriter who lives Franklin, Tenn. with her producer husband Nathan Nockels (Passion, Matt Redman, Laura Story), and their three children. Christy and Nathan toured nationwide for several years as the duo Watermark, recording four acclaimed albums together. In 2009, Christy released her first ever solo album, Life Light Up followed by a 2012 sophomore release Into The Glorious and a critically acclaimed live worship album Let It Be Jesus in 2015. With GMA Dove Awards to her name, Nockels unveiled her first Christmas project, The Thrill Of Hope, in the fall of 2016. Her new album, Be Held -Lullabies For The Beloved is set to release Sept. 29.