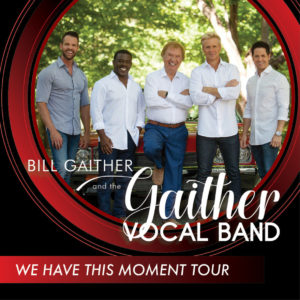 GOSPEL MUSIC LEGEND, BILL GAITHER TAKES WE HAVE THIS MOMENT TOUR TO 23 CITIES THIS FALL

Alexandria, Ind. (May 31, 2019)– Multi-Grammy Award winning recording artist, Bill Gaither, along with Premier Productions, will present the We Have This Moment Tour to 23 cities during the Fall of 2019, as he brings his multi-award winning group, The Gaither Vocal Band to 16 states during September, October and November (complete Tour dates listed below).

For nearly half a century, Gaither, a multiple Grammy and Dove award winner, has been a musical trailblazer. His reputation as a performer, songwriter and mentor for newly-discovered artists is known world-wide. His beloved series of Homecoming CDs and DVDs continues to top the sales charts and attract an ever-increasing audience. “There are few things in this world I enjoy more than leading an audience through an evening that leaves them inspired, encouraged, hopeful – perhaps introducing them to songs or ideas they can hold onto when life gets tough,” Gaither shares. “It is always my goal that a Gaither concert lasts much longer than one evening, but that it stays with folks long after they walk out the door of the concert venue.”

The 2019 Fall Tour affords Gaither the opportunity to introduce new music to concert attendees with the release of the brand new Gaither Vocal Band recording. “I can’t remember a project that I am more proud of artistically, psychologically or spiritually than I am about this group of songs,” Gaither states. “This present Vocal Band has three years under our belts. We have worked hard to polish a sound that I think is absolutely one of the best sounds.”

Tickets for the 2019 Fall We Have This Moment Gaither Tour go on sale June 10, 2019. To purchase tickets or obtain additional details visit www.gaither.com

About Premier Productions:
Pollstar Magazine ranks Premier Productions as the largest producer of live Christian events both nationally and internationally. Over 18 million people have attended a Premier event in over 4,000 concerts worldwide. Premier promotes tours for Hillsong UNITED, Hillsong Worship, Young & Free, Kari Jobe, Jesus Culture, Lauren Daigle, Gaither Homecoming, Sadie Robertson, The Newsboys, comedian John Crist, Rend Collective, as well as their annual Winter Jam Tour Spectacular and OUTCRY Tours. Premier Festivals promotes 10 of the largest Christian Festivals in the U.S., and over 80,000 Passengers have sailed with them through their Cruise Company.