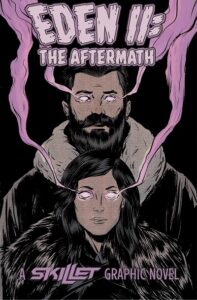 We all struggle with temptation at some point. When the enemy tries to tempt us with something that sounds like it will solve all of our problems or is too good to be true, we must secure our trust in God and turn to Him for wisdom and discernment to fight back. This is the overarching theme in the latest graphic novel co-written by Skillet’s John Cooper along with Ryan O’Sullivan, Eden II: The Aftermath, where we see each character face temptation and the results of their choices.

Picking up 5 years after the first story of Eden left off, main characters John, Korey, their children as well as Seth & Jen have joined forces to protect the town of Coltonville. While it has been a place of peace since the attacks of the beings known as rowdies ceased and the defeat of the Lilac Lodge cult that threatened to misuse the power of the purple door, the opposing community of Stormgate wants to disrupt the peace of Coltonville and do away with its citizens.

When John is taken from his patrol post and thrown into a fight club of sorts he must win his way out by defeating his opponents. John is challenged on physical, spiritual and mental levels as he fights and witnesses the other battles take place. We see him influence people he meets as well as be influenced by an unlikely new friend.

Throughout the book, a mysterious man tries to sway individuals to do his bidding. His silver-tongued promises seem like they would easily take care of the circumstances the characters have found themselves in, but they come with a high price; a price that demands a discerning spirit to see through his words. As each character makes their decision, we gain insight into their motives and where their allegiance is placed.

In the end, it appears that this story is far from over as it hints at adding another chapter to the world of Eden in the future.
The artwork and overall feel of this second book is comparible to the first in a good way as it makes for a cohesive reading experience. I still love that we get to see the band members of Skillet in this form!

With a bit of mystery, surprises, suspense and endearing characters to cheer on in addition to the morals found within the story, Eden II: The Aftermath is definitely a good read for fans of Skillet and comics alike.