Book Review: Stu Garrard ‘Words From The Hill: An Invitation To The Unexpected’ 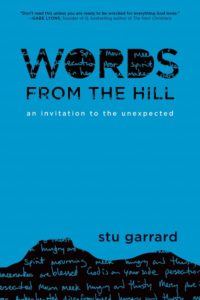 There’s a difference between merely reading a book and understanding it. In school, it wasn’t enough to scan a passage briefly, identify a few keywords, pass judgment and move on to the next thing. Failure to make sense of the concepts being discussed could result in further confusion later, and in some cases, such as chemistry experiments or recipes, catastrophic failure.

Reading comprehension is important for the Scriptures, too. While misreading the Bible probably won’t cause a chemical explosion or burn your house down (I hope!), it has the far more devastating potential to destroy relationships and break hearts. Laws were created by man and became clanging gates, locking people out rather than welcoming them in. The accumulation of stuff was mistaken for evidence of the blessings of God. Jesus had to flip the paradigm on its head and show them that they had climbed their tower of laws and possessions as surely as the Tower of Babel, thinking it would bring them closer to God. But He was waiting for them in the dust and darkness all along, reaching out a hand and encouraging us to form a human chain, united in Him.

As part of the Beatitudes project, Words From The Hill: An Invitation To The Unexpected translates those words as they were originally intended – an invitation to find God where we are, how we are. To let Him soften us instead of being hardened by our pain.

Stu Garrard meshes his own observations and experiences with those of others who have known and seen brokenness firsthand. He teaches to redefine poverty as a condition that affects both the rich and the poor. That mourning has more to do with loss than merely death, yet we can find God reaching out for us to offer comfort, because He sees us and comes to us. He shows us that we can reach out to those nobody else considers worthy of attention; the meek, who somehow push through their desperation with grace. That we who see these injustices and desire change with all our hearts will see it come, whether from our actions or those of others. Through all of these things, Jesus is near to us.

I found myself crying while reading the chapter on mercy, on hearing the incredible story of Gaile, a woman who spent 24 years on death row before having her sentence changed to life and being released on parole. Through her tale, we see what it means to receive that which we sow back from the ground. We are also shown that having pure hearts is more about being open and consistent in our portrayal of ourselves to the world than simply striving for perfection. That if we retain our childlike wonder, we’re far more open to God’s leading than if we rush from one thing to the next. Garrard explores what it means to be a peacemaker; to throw rescue ropes and not stones, to crush barriers into powder one chip at a time even as we use the broken pieces to build something we can all stand on; to brave the potential for peril to achieve change rather than cowering behind our defenses hoping we’ll come through unscathed.

We are given a new sense of what it means to be persecuted for what we believe; not simply limited to those in foreign countries being targeted for slaughter as Christians. Instead, it is refusing to compromise our commitment to living what we believe, even if it means we are seen as backwards or inferior. By traveling in the opposite direction of our culture, feeling the strain while choosing love and mercy over hate and revenge; giving and sharing over taking and grasping. The eternal rewards of doing so far outweigh the cost.

Finally, we are given a challenge. Over centuries of faith in God, we have written lists of our basic beliefs – what we agree happened and will occur – but recite them by rote and return to life as usual. The dare is this; can we seek to change lives and hearts (ours and our fellow men) by sharing the presence of God that surrounds us. Overflowing with the qualities He values; giving as we have been given.

I guess the true measure of a book like this is not whether you find yourself agreeing with everything he says or not, but whether some of the things it says break through your conscience to needle you every so often. Words From The Hill certainly did that. Like an artist mixing paint on a palette, Stuart Garrard blurs the black and white we’ve chosen to cling to into gray, before teasing bright colors out of the muddle; small glimpses of what it means to choose a sacrificial, messy, extraordinary life.