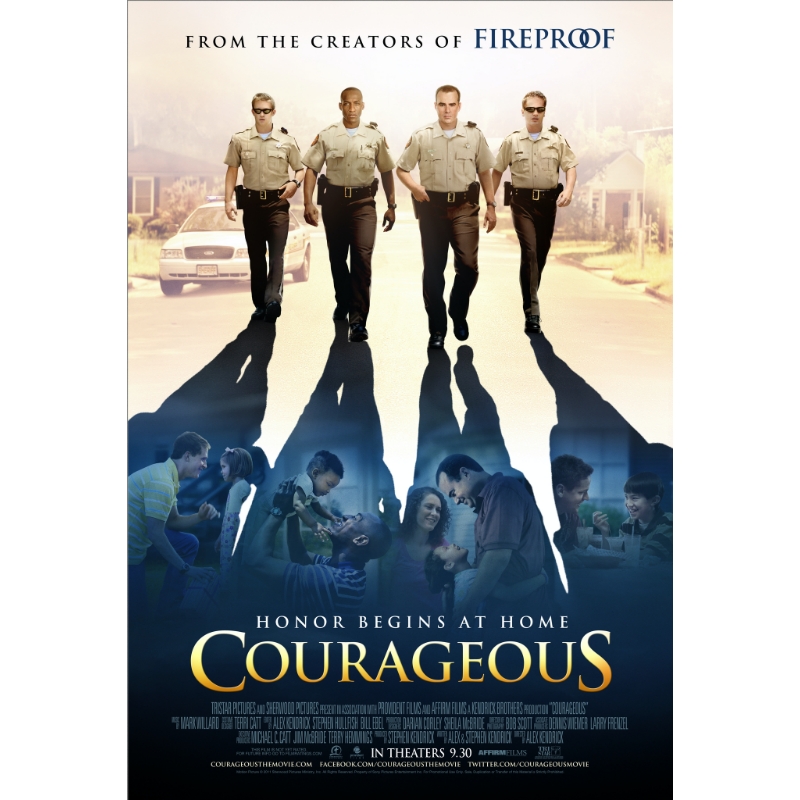 So why exactly are we going back and re-posting a review for the movie Courageous ten years after it’s release? Well, the film will be released back into select theaters this September to mark the 10th Anniversary of the film.  Courageous Legacy comes to theaters on September 24th and has remastered with new coloring, picture, new scenes and a new ending!  As we wait for this, check out this review TCE’s founder Jay Heilman wrote back in 2011, which includes additional comments about visiting the film’s set in Albany, GA and serving as an extra in the film!

When I sat down to write this theatrical review for Sherwood Pictures‟ newest film Courageous, I admit to being a little bit biased and partial to the film because of the involvement that ChristianMusicReview (CMR) played in the filming process. You see, I was one of the people fortunate enough to not only visit the movie set in Albany, GA as they were filming in June 2010 – but I also felt very humbled to be able to take part in filming the movie as one of the many extras on hand. It was an experience second to none, and if you‟d like to know more about CMR‟s experience on the set, you can see highlights of our visit on Kingdom Builder TV at http://www.youtube.com/CHRISTIANMusicREV.

For those of you who go and check this movie out in theatres this weekend (September 30th) will see many familiar faces throughout the film. These include Alex Kendrick, who in addition to playing Officer Adam Mitchell in the film is also one of the writers and the director of the film. Ken Bevel plays Officer Nathan Hayes, and many may remember him as Michael Simmons in the 2008 film Fireproof as well. This film also welcomes newcomers to the Sherwood team with Ben Davies who plays Officer David Thomson; Kevin Downes who plays Officer Shane Fuller and rounding out the lead actors is Robert Amaya who plays Javier “Javy” Martinez.

The story was very well crafted – one that encompasses the lives of four Albany police officers and their new-found friend. From beginning to end, this film will have you laughing, crying and just about every range of emotion that you can think of. The main theme with Courageous focuses on the importance of the role of the father in the home. The story of the film follows the lives of four police officers, who are all fathers, and the ways in which they approach that leadership at home. Like Facing The Giants, Alex Kendrick plays Adam Mitchell, the lead actor in this film, in which much of the story centers upon. Adam is a veteran police officer who seemingly has everything – a nice home, a wife and two children. It‟s when tragedy strikes his family, that his life goes into a down-spiral. During the process, he discovers not to take for granted the things in which Lord has given him, namely his children and with the help of his friends, come together to make a pact to be better fathers and husbands in their homes.

One of the characters I most enjoyed from the film would definitely have to be Javy. The Kendrick Brothers did a great job of not only making him a lovable character in the film, but the comic relief as well. There is a scene in which Adam and Shane are driving in the squad car, and swing by to pick up Javy for lunch. A slight detour to lunch occurs, and the officers pick up a drug dealer who has just gotten busted. When placed in the backseat with Javy, he takes on the persona of the leader of the „Snake Kings‟ gang and has a little fun with the thug, helplessly hand-cuffed in the back seat. You have to see the scene to really enjoy it, which had me laughing pretty hard. 🙂

Courageous is definitely a movie I would highly recommend going to see this weekend. It‟s more than just a great movie, but rather a film that, like Fireproof can go on to be used to make an impact on movie-goers. That is my prayer anyway. I pray that the Lord can use Courageous to be a great encouragement to fathers and husbands everywhere and can do amazing work in homes as Fireproof did in marriages.

REVIEW EXTRA:
Being on location while filming was also tough in a way, because I knew many of the key moments of the plots a good year and a half before the movie hit screens this week. So it was hard knowing so much about the movie, and for the sake of not ruining the movie experience for the audience, being careful not to divulge too much of what was going to happen. Even after finally seeing a screening of the movie in March 2011, I was still surprised a bit with a few of the scenes that landed in the movie. I had only heard about these scenes, but to see them brought to life on the screen was pretty cool. The coolest part of watching this movie of course was actually seeing myself up on the big screen. The three days of work had paid off, for I had my own „4-seconds of fame‟. It was a humbling experience and I hope the movie as a whole has great impact on people who go and see it. My wife and I sure got a lot from it and hope you do too.

I give this movie two-thumbs up, five stars and well – it‟s definitely worth checking out!