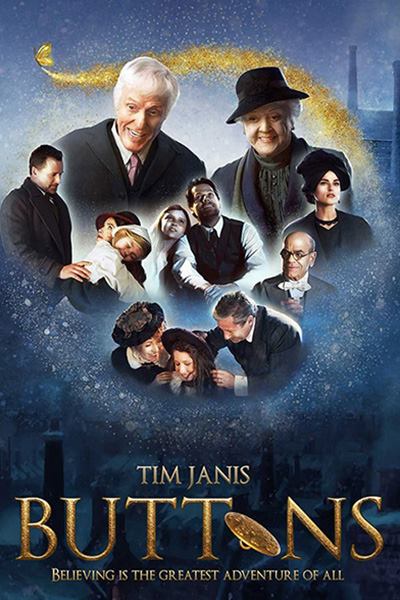 Christmas is the perfect time to bring loved ones together and watch your favorite holiday films. With an amazing ensemble cast and heartwarming story, Buttons is sure to be added to that list for many.

Set in a quaint village where the magic of Christmas drifts through the air as snowflakes flutter from the sky, Buttons weaves a tale that reminds us of the importance of believing and keeping hope alive.

When an ill orphaned child named Emily is found by a kind nun, she is taken in and cared for until her fever breaks. While recovering, Emily is visited by a woman named Rose who tells her a story about a young girl, Annabelle, her family and their experiences through Annabelle’s growing years and the guardian angel who watched over her.

We see Annabelle’s mother, Sarah, and father, William who is a sea captain, portrayed as loving parents. Since William’s work takes him away from his family for extended lengths of time, Annabelle misses him greatly. During these moments Annabelle is comforted by the presence of a guardian angel who encourages her to stay optimistic and find the blessings around her. When the family faces a tragedy as her father is lost at sea, Annabelle’s faith begins to fade. Forced to accept work in a cotton mill and move into a tiny apartment, Sarah tries to give her daughter the best life she can at the expense of her own. Now orphaned, Annabelle is sent to work in the mill and live with several other children who’ve also lost their families. Through this time, Annabelle finds it hard to believe in anything, much less her guardian angel whom she hasn’t been able to see since she learned of her father’s death.

After being treated unkindly, Annabelle runs away from the mill house and is left on her own in the streets. One night she finds an older gentleman on a park bench. With her belief still lacking, she fails to recognize him as the guardian angel that she knew before everything changed so drastically. Annabelle shows kindness by offering him her last piece of food and scarf to help guard against the winter elements.

On Christmas Eve, Annabelle makes her way to the church she had been seeking shelter in, though this night’s route takes her on a treacherous path leading to a terrible accident that puts Annabelle’s life in great danger. A miraculous act rescues her and ultimately guides Annabelle to a loving family.

Through this story Rose tells, Emily finds hope and is inspired to believe in a better future – a future that intertwines with Annabelle’s life in a beautiful way!

As I watched Buttons, I was reminded of several films I grew up loving as it captures the joy, hope, kindness and childlike wonder that surrounds this glorious season. The message of the film shines with the Christmas spirit as it inspires viewers to never give up even through the darkest of times.