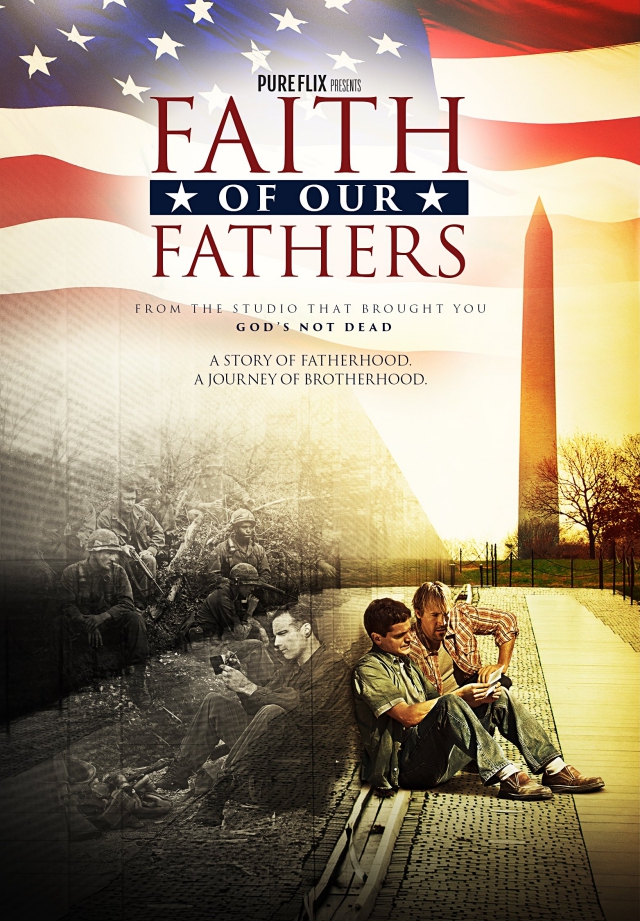 “The Vietnam War is one of those wars that America would like to forget.” That’s what my grandfather told me as a kid. “It was a total disaster. Tens of thousands of soldiers died, and for what? Political agenda?” My grandfather served in the US Navy during World War II and these were the strong words he had said to me as a young kid. I didn’t think much of it then, but I now understood what he meant, and will always have that engraved into my mind. Now films based on the Vietnam War are aplenty. Apocalypse Now. Platoon. Full Metal Jacket. Casualties of War. I can’t remember one though that centered faith around its plot – until now. Enter Faith of Our Fathers, a new film being released by Pure Flix (God’s Not Dead, Do You Believe?) on July 1st.

Not to be confused with the Clint Eastwood film Flags of Our Fathers – the new film is a period piece whose storyline jumps back and forth between 1969 Vietnam and 1997 America. The film’s cast boasts many familiar actors including Stephen Baldwin (The Usual Suspects, Bio Dome); Kevin Downes (Mom’s Night Out, Courageous); David A.R. White (God’s Not Dead, Jerusalem Countdown); Christian singer Rebecca St. James; TV-veteran Candace Cameron-Bure (TV’s Full House) and a cameo by Si Robertson (A&E’s Duck Dynasty).

John Paul George (Downes), yes, like the Beatles John Paul & George – comes across a box of his father’s war effects in his late mother’s home. It’s then that John Paul realizes that there was correspondence sent to his mother from an Eddie Adams. John Paul is then persuaded by his fiancée Cynthia (Cameron-Bure) to follow up with this Eddie Adams to fill in the holes of the mysteries surrounding his father’s death. With a wedding just around the corner, John Paul sets out to find Eddie, who presumably lives in Mississippi, to ask questions about his father when a phone call leads them to a non-interested party on the other end of the line. His fiancée is reluctant to let him go – but soon gives in. Upon arriving in Mississippi, John Paul meets Wayne Adams (White), Eddie’s son. At first glance, Wayne is a gruff, and mysterious backwoods hillbilly totally reluctant to answer any of John Paul’s questions. This is where the fun starts. A road trip to Washington DC to the Veterans Memorial Wall. Why? “Because that’s where we have to go” Wayne tells John Paul.

The on-going joke in the film is Wayne constantly refers to John Paul as “Ringo”, which the music buff in me found hilarious. Also piecing together their first names John & Wayne – and well, you get the picture. I’ll break the film down into both 1997 (not sure why the film was set in 1997, as it really doesn’t explain why) and the 1969 Vietnam flashbacks, so not to confuse.

The road trip sets out and is destined for disaster from the very beginning. Along the way we have a hilarious encounter and cameo from Duck Dynasty’s Si Robertson whose pretty good at pitching his beef jerky and “iced tea”. He tells John Paul “It’s so good, you’ll punch your mama”. After getting into a comical altercation in the parking lot (which you’ll have to go and see the film to see more of Si!) and later picking up a few drifters (St. James and David O’Donnell), the guys encounter some “car issues”. The great thing is, despite the chaos going on during the road trip, the two stick it out and continue on their journey to the nation’s capitol, not knowing really what will happen next. The bantering going on back and forth between John Paul and Wayne is downright hilarious. John Paul is the reasonable and serious one, whereas Wayne is a spontaneous and ‘seat-of-your-pants’ type guy who you can never quite figure out. I have seen movies with David A.R. White in it, and I have to say, that this is my favorite role he’s taken by far.

As the film moves on, we see the two open up to each other and reveal little tidbits about one another. While John Paul is a little more forward about himself, Wayne is a bit more reserved and chooses not to reveal too much. John Paul wants to know about his father, which Wayne divulges bits of information through letters his father wrote to his mother. For a price. “$500 per letter”. I found myself questioning why the Wayne character would do this, and that’s one thing I found the movie never really fully explains, but I have my guesses. We find out later in the film why Wayne is so reserved, so I won’t ruin that here in this review. It’s when the two get pulled over by a state trooper where things get both interesting and complicated.

The question is, will they make it to the Wall? Or will their differences keep them from following through? Either way, the camaraderie between the two is both humorous and sentimental. The defining moments towards the end of the film make the journey all the more priceless.

John Paul and Wayne’s fathers serve in Vietnam together. John Paul’s father Stevie (Sean McGowan) and Eddie Adams (Scott Whyte) are being led on a mission by Sergeant Mansfield (Baldwin) to recover the bodies of soldiers from a plane that was gunned down in enemy territory.

The interactions between the two are somewhat similar to their sons in the present day, although the ensuing war around them makes the scene even more tense. While Stevie prays and reads his Bible on rests and lookouts, which Eddie mocks him for. At one point Stevie is even eventually reprimanded by Mansfield for “distracting” the men with his talk of God and the Bible. However, this doesn’t stop Stevie’s pursuit of witnessing to Eddie though. As they take on enemy fire and get closer to the downed aircraft, the story culminates and reveals the true meaning of the film. Honor and Sacrifice. The Bible says in John 15:13 “Greater love has no man than this, that a man lay his life down for his friends”. These were the words of Jesus Himself– the one who made the ultimate sacrifice. The One who died on the cross for the sins of mankind. Overall, this was a great and entertaining film. Not only did it contain a great message about sacrifice and brotherhood, but it also kept my attention with its many comedic moments. I know a lot of “Christian” films get knocked for being cheesy and “religious”, but that’s just not the case with this one.

I don’t know how much the budget was for this film, but it was well written, well acted out and well directed. It portrayed a believable story that I think could be something that believers and unbelievers alike could enjoy. The duo of Kevin Downes and David AR White are truly what makes this movie the entertaining ride it was. They not only manage to carry the film, deliver a message, but also mix in some memorable one-liners along the way. Just before you celebrate the birth of our nation this 4th of July, be sure to check out Faith of Our Fathers. In addition to being a film that I believe movie goers will enjoy – but it also does well in highlighting the men and the women who have given the ultimate sacrifice for our nation – their lives. It’s to them we owe a great amount of gratitude to. Faith of Our Fathers. July 1st. A must see. Make plans now to check it out, you won’t be sorry you did!

Special Addition: Today’s Christian Entertainment wants to take this opportunity to commemorate Russell Wolfe, who along with David AR White and Mike Scott, founded Pure Flix in 2005. Wolfe, who played the character Dr. Stevens, in the hit film God’s Not Dead, recently passed away May 27, 2015 after a battle with ALS (Lou Gehrig’s Disease). I like this quote that Wolfe made regarding the mission of Pure Flix: “We just went out with the dream and the idea of impacting the culture for Christ. We thought media was the most powerful method to get that message out there. Many people have tried it in the past. It’s a difficult thing to do. Not that we’re that great, it’s just that we’ve been blessed in the way that we put it together.” Amen. Thank you to Russell Wolfe for his vision and our condolences and prayers go out to his family.

Site Links for Faith of Our Fathers:

Links for Faith Of Our Fathers: