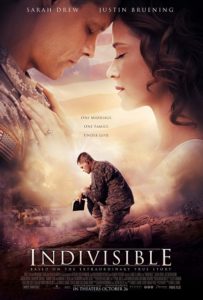 The life of a soldier isn’t an easy one with many trials that test not only your faith but your very will to live. For their loved ones back home, it’s a different type of battle they face every day trying to carry on with “normal” life while dealing with the feelings of worry and anxiousness that plagues every phone call and every knock on the door. Based on actual events, Indivisible follows the stories of four soldiers overseas and the lives of their families who remain home on a military base during the 2007 advance in Iraq.

Chaplain Darren Turner is setting out on his first deployment and struggles with the thought of leaving his family for 15 months. Joining him is a new father, Lance Bradley, whose young wife, Amanda, is having a having a hard time coming to terms with the fact that he is leaving her alone on the base with their infant child. Shonda is a strong female role model working as a police officer & is also a single mother. Michael is a hard-headed seasoned veteran, husband and father who has been to Iraq before and deals with the lingering effects from his time there.

When the chaplain arrives at his station in Iraq, he is presented with evidence of families who have been torn apart by the war. He and his wife are both determined to not let the distance & experiences hinder their love and promise each other to keep their lines of communication as open as possible. Through his interactions with fellow soldiers, Darren tries to encourage but he isn’t always met by welcoming responses.

Back home, Darren’s wife, Heather, along with other military wives lead a readiness response team to help families on base through their difficulties coping with the soldier in their lives being gone and in the heartbreak when they don’t return from war. Heather begins to have a harder time balancing homelife, kids and demands of her position with the readiness team which at times stretches her beyond what she feels she can bear.

In Iraq, the soldiers experience tragedy when two soldiers in their unit are killed in an attack as they tried to save civilians. Through that loss, Darren is faced with situations that he isn’t fully sure how to handle or how to comfort those closest to the event. He is challenged by his fellow soldiers with questions about faith, God and life in general. As the weeks go on, Darren fights to not become hardened by the circumstances surrounding him while he continues to try to put up a brave front.

Shifting between the scenes of war in Iraq and life at home shows battles of different types on both fronts. While Darren and his unit are under siege, his family experiences a medical emergency which strains the relationship between Darren and Heather.

As Darren inspires and draws the soldiers around him closer to Christ, his own faith is shaken. When loss strikes again within their unit, this time hitting much harder, it takes a major toll on all involved.

With his deployment ending, Darren returns home and is faced with a whole new set of trials as he tries to readjust and deals with the aftermath and PTSD. This further hurts his marriage as he is reluctant to open up and seek help for himself. Heather is pushed to her breaking point and demands Darren seek help. While Darren processes through his PTSD, both he and Heather seek counseling together leading to breakthroughs in understanding for each of them. We see characters whose lives have been forever changed and some with renewed faith and others who discover just how much God loves them for the first time.

All in all, Indivisible is a powerful, gripping film that will take viewers through emotional highs and lows before ultimately leaving you with a sense of hope as you witness the well-told story of faith, loyalty, bravery, love & loss. While the subject matter may be difficult for some to watch at times, Indivisible’s cinematography and the actors ability to convey the emotions needed to translate the message will keep you intrigued from start to finish.

Rated PG-13 for some thematic material and war violence