Film Review: Show Me The Father 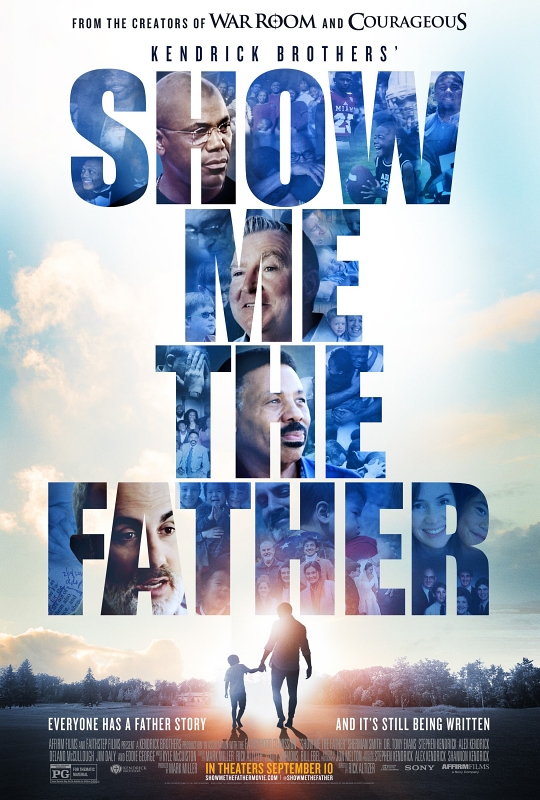 Comprised of Alex, Stephen and Shannon, the Kendrick Brothers are no strangers when it comes to faith-based film.  Since releasing their independent debut film Flywheel in 2003, the Kendricks have been synonymous with quality Christian movies.  2021 marks a new chapter of sorts for the film family, with the release of their newest feature Show Me The Father, which also happens to be the first documentary released from the sibling filmmakers.  It’s no secret that I have always been a fan of the Kendrick Brothers’ work, dating back to early 2006 when I got a home DVD screening copy of their first major film, Facing The Giants.  Since then, I have not only thoroughly enjoyed the films that have followed, but taken stock in their work through promotion on our site and across social media strongly believing that these stories not only bring entertainment, but more importantly hope and change.  Like their previous works, Show Me The Father, contains a powerful, yet practical message.  A message that sadly is much needed across the landscape of today’s fallen world.  Tackling a subject that was visited in the 2011 film, Courageous, Show Me The Father goes one step further in highlighting the importance of the role of the father in a child’s life and using the stories of well-known athletes in former Titans and Ohio State Buckeye Heisman-winning RB Eddie George; former Seattle Seahawks RB/Coach Sherman Smith; Focus On The Family host and evangelist, Jim Daly; Pastor Tony Evans; former Cincinnati Bengals RB Deland McCullough and even the Kendrick Brothers to do it.

After watching the film, I could clearly identify with the stories of many of the men featured, having had a tumultuous relationship with my own father growing up.  Even though my dad was present in the home, his abusive ways often left me wishing he wasn’t there.  He was there, but not there, if you catch my drift.  One can find by watching this new documentary, that that is not normal behavior of a father.  A father was intended by the Lord to be a protector, a leader, a provider to his wife and children.  Sadly for myself and many other out there who may be reading this right now, this was your “normal” growing up.  Though I made up and eventually forgave my father when I was older, he wasn’t there for me in those impressionable years I needed him the most, which led me down a path that I wish I wouldn’t have walked.  It also left me with many questions when my wife Shannon and I began having our own children.  In hindsight, if anything this documentary conveys – is that that cycle can stop with you.  I chose to take a different path with my own five children, vowing not to be the kind of dad that mine was to me.  Show Me The Father is a great film that highlights many ways children can have that loving father in their life, whether it is through your earthly father, an adoptive father or our Heavenly Father.  This film also could not have come at a better time.  The message of this powerful documentary is sorely needed in today’s society.  One that finds itself often times lost from the true path that the Lord intended us to be on.  Where the nuclear family is under attack daily.  Society insisting that a mom-dad house is no longer needed and that a home and healthy growing family can be something other than that.

In closing, I believe without a doubt that Show Me The Father and its incredible real-life stories will go a long way in inspiring viewers that despite the negative impact that the failures, shortcomings and absences of an earthly father can have on a child. Knowing we have a Heavenly Father that will step in and step up in their place is not only reassuring, but can offer a true peace that only God Himself can offer.

I encourage you to check out Show Me The Father on opening weekend.  The film is packed with disheartening, yet truthful stats and stories from people you know with a twist that you will not see coming.  It certainly challenged me as a father and I know if it had that kind of impact on me personally, it has the potential of being an impact on others who venture into theaters on September 10th to check it out.  You will leave the theaters with a new understanding of fatherhood and exactly what the Lord intended that role to be.

NOTE: When I originally screened this film in June 2021, my wife Shannon watched it with me.  Her response was “Wow, I really think the Lord is going to use this in a big way!”  Sadly, this would be the last film her and I would see together.  She later contracted COVID-19 in August and after a three-week battle with COVID-pneumonia, she passed away on September 1st.  This devastating loss not only left me a widow and my 5 children motherless, but amplified the message of this film even more and the even greater importance I now play in the life of our kids as their father.  Shannon always believed in me and knew that I could always better myself daily as a father.  I am so thankful for this film and hope and pray that it has the impact on movie goers that it has had on me.  It means even more to me now as I seek the Lord’s guidance in moving into a future where I have to step up even more.  My children and my children’s children depend on the decisions I make today as their father.  I miss my wife.  But I know through Christ I will see her again one day.  God is still in control.  God is still on His throne.  God is still good.  All the time. ><>

Links for Show Me The Father: