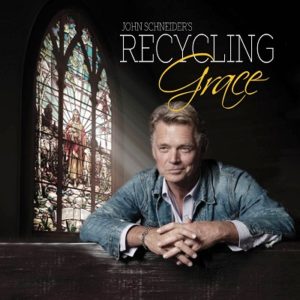 Many may recognize John Schneider’s name from the countless films & TV shows he has been a part of over the years, including two of my personal favorites – Dukes of Hazzard and Smallville! Some might be surprised to find out that in addition to being an accomplished actor, John has found success as a recording artist as well having released several country music albums over the past 30 years. After experiencing a roller coaster of life events, John is set to release his first album of inspirational music. Recycling Grace features a few beloved gospel songs and new tracks that are sure to become favorites upon listening.

“Stained Glass” opens the album with an ode to an abandoned church that has become run down over the years, but the stained glass window remains intact reminding a weary soul that hope can still be found.

“If It Wasn’t For The Mountain” tells of being thankful for the lessons learned and faith strengthening journey that the obstacles of life presented along the way. The struggles, never-ending climb and everything that tries to lead us astray can weigh heavily on us, but God can use all of this to shape us into who He created us to be.

“Faith Like That” shares the story of someone who sees and is inspired by the incredible level of faith displayed by another who has suffered an unimaginable loss, yet holds firmly to the promises of God that we are never alone & death is not the end.

Title track, “Recycling Grace”, shines a light on how extending the grace we’ve been generously given from God to those who have lost their way can change their life and lead them towards true salvation in Christ.

“Amazing Grace” gets an interesting and unexpected remake on this project as John is joined by guest vocalists singing this familiar hymn to the tune of the 1960’s pop/rock standard “House of The Rising Sun”. It may sound like an odd combination, but this rendition is a must listen!

“Thank You Jesus” offers praise and gratitude to the Savior for rescuing us from the darkened path of sin that was leading to nowhere. Because of His merciful forgiveness, we can have the promise of a future filled with hope in Him.

A bluesy gospel version of Conway Twitty’s classic, “That’s My Job” parallels the relationship between a father and son on earth and the one shared between our Heavenly Father and us as we grow in our relationship with Him.

“Thank God You Do” closes the collection with a prayerful reflection on the profound impact that the love of someone who is a faithful believer can have not only on the life of another person, but also their faith in God. It recognizes the importance of edifying & keeping each other accountable in your friendships and relationships as you both navigate your journey as a Christian.

John’s ability to tell a story in song is clearly evident as you listen to Recycling Grace. Elements of gospel, country, blues, jazz and rock n roll combine to produce an intriguing musical backdrop to the stories and messages of hope woven throughout the album. As someone who has been familiar with John’s music over the years, it is great to hear an inspirational record from him that directs attention heavenward and will be a welcome addition to fans’ music collections.