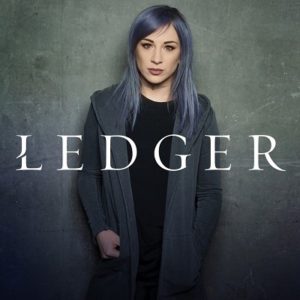 Jen Ledger has been the drummer and vocalist in the highly successful Christian rock band Skillet for several years. While still with the band, Jen is also making a name for herself as a solo artist releasing her EP, Ledger.

“I’m Not Dead Yet” is a declaration of remaining steadfast in the face of what attempts to break and destroy us. With a bold faith in God and His power within, we can fight back against the enemy’s advances.

Joined by her Skillet bandmate, John Cooper, “Warrior” continues the empowering theme with an anthem for believers to stand strong when we’re embattled whether the attack comes from the world around us or within our own hearts and minds.

Being one of my personal favorite tracks on the EP, “BOLD” carries a message of claiming victory in Christ over the lies we’ve been told that try to tear down our faith and confidence. Trusting that the Lord has already won, we can embrace who we are in Him and be exactly who He created us to be.

“Foreigner” calls out the façade of riches and false promises that the world attempts to sell us on. It emphasizes keeping our eyes fixed upon Jesus and having the wisdom to discern what is truly important.

The vulnerable “Ruins” tells of being overtaken by God’s love as He breaks through the barriers and walls we’ve built up. While we may still struggle with fully accepting His love after being hurt in the past, we can trust that our fragile hearts are safe with Him. Vocally, we hear more of Jen’s range featured on this song.

Closing track “Iconic” celebrates being swept up in a whirlwind of love and, depending on your mindset, can be directed towards a significant other or God. Choosing to look at the words as being sung to God, they depict having the kind of deep, all in relationship with Him that would cause everyone who sees it at work in your life to want it in theirs too.

Stylistically, we hear similarities to much of what Skillet fans have become accustomed to, however this EP as a whole stands strong and sets itself apart. Jen served as co-writer on each track featured and teamed up with Skillet bandmate Korey Cooper as well as Full Circle Music’s Seth Mosley to produce the project making for a fantastic collaboration. With driving rhythms, high production value, powerhouse vocals and songs that boldly encourage listeners to find their strength and identity in Christ, Ledger gives a solid debut proving that she has much to offer and voice all her own.