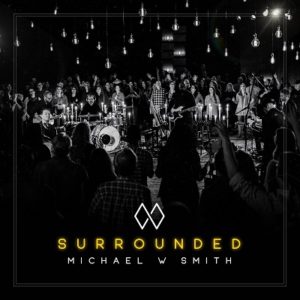 Never before have the lines been so sharply drawn between individuals. Every group races to claim moral superiority over the other, even as they twist the truth. Whether shouting unfounded accusations as though they were the proven gospel truth, skewing statistics to support their shaky claims, or interpreting another’s actions in less than charitable ways, it’s a battle for popular opinion. Even churches are no exception to this rule. Progress or regress earns censure and derision, deserved or not.

We seem to have forgotten that Christ wished for His people to be as united and of one mind as He and the Father were. Everything else can take a back seat to the word of God, which calls for both justice and mercy to be done, preferring the latter over sacrifice. Michael W. Smith attempts to capture a moment in time where this unity is at least momentarily realized in his latest worship album Surrounded. It’s the second of two brand new albums releasing a week apart for the veteran artist, a rare thing for any musician. It can explained by the fact that most of the album’s songs predate it; some of them I recognize from other albums I’ve reviewed in the past, while others have a copyright date earlier than the current year.

Streaming forward like a surging crowd that cannot be contained, “Your House” invites us to enter into the house of God, forsaking the inhospitable conditions outdoors for the warmth of His love. Into this sanctuary, we bring our praises and gratitude. “Light To You” quietly wonders at the fact that our darkest moments are as light compared to His ability to handle them. Wherever we lose ourselves, God is able to find us there. The song swells as it progresses, moving beyond surprised awe to a declaration sure to push back the shadows. “King of My Heart” expresses a desire for Jesus to not only rule over our inmost beings, but also to provide comfort and support throughout every struggle. He will never fail us or be less than we need Him to be. I already liked this song, and Smith’s rendition is heartfelt and sincere. “Reckless Love” defines God’s love in terms of His care for us before we could choose Him, and His effort and sacrifice on our behalf when we were His enemies. We don’t deserve to be treated in this manner, but He loves us enough to extend mercy anyway. He crosses every distance and destroys every obstacle in between us.

“Here I Bow” acknowledges the sense in only bowing before Jesus, and in so doing, we then lift His name. Forever and always, we belong to Him. Soothing comfort escalates into a cheer of exultation. “Miracles” employs contrasts (hearing/silence, death/life) to compare the miraculous deeds Jesus performed in the Bible to the wondrous works He is accomplishing even now in our lives. When we recognize these occurrences for what they are, we can’t help but believe He is who He claimed to be. Smith asked the audience whether anyone present the night of the recording needed a miracle, hoping to connect the words of the song to their (and our) actual needs, not a mere blind parroting of the chorus. The chorus is repeated several times in Spanish, so I’m assuming there may have been a large Hispanic presence that night. “Do It Again” holds firm to faith even as things aren’t happening as quickly or decisively as we would like them to. We have never been forsaken to this date, and there’s no reason to think this time will be any different. Having seen Him do impossible things in the past, we have come to expect them. “Surrounded (Fight My Battles)” holds a powerful image tucked within its repetitive verses and chorus. We can conquer our enemies by reminding ourselves that although they are encamped around us, God stands between us and them at all times.

“Build My Life” longs to see and be filled with the attributes of God, that we might be led to express His love to others. It’s a prayer that looks beyond simply having our needs met, but seeks to give as it has been given to us. Learning from the living God, we stake our lives in a foundation that cannot be moved. “Washed Away” pairs an honest confession of past guilt with the relief of being redeemed, cleansed of every sin. His sacrifice completes us, filling in all the missing pieces. Lyrics from “Nothing But The Blood” provide the song’s bridge. Smith’s take on “Great Are You Lord” takes a while to get going, but when it finally does, there’s more of the chorus than anything else, which really disappointed me. “Light To You (Reprise)” dwells on God’s capacity for night vision a little longer, with no explanation as to how we returned to this topic again.

Followers of Christ are to be united in purpose, passion, and surrender, all of which are to be rooted in Him. For a little while, Surrounded draws everyone together in worshipping the Lord and acknowledging His power to overcome our obstacles, however daunting. Michael W. Smith reminds us to take courage and trust God is meeting all of our needs.