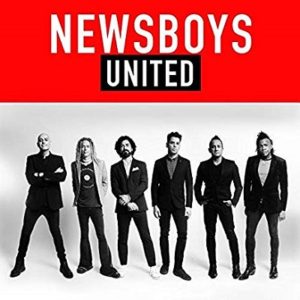 Fans everywhere rejoiced when it was announced that former Newsboys members Peter Furler & Phil Joel would be joining the band’s current lineup of Michael Tait, Duncan Phillips, Jody Davis and Jeff Frankenstein for the monumental Newsboys United tour. Anyone who has been blessed enough to attend one or more of the shows within the past year were treated to an amazing musical event consisting of Phil Joel’s band Zealand opening followed by an unforgettable night that perfectly combined performances of “old school” Newsboys and the modern worship anthems they have become known for in recent years. I’m sure I can speak for more than a few folks when I say how happy I was to hear that a new album featuring ALL of these talented men was in the works and the finished result, United, does not disappoint!

“Greatness Of Our God” opens the album with a heroic anthem declaring and celebrating the awesome power of our Heavenly Father. The lyrics boldly proclaim a reverent belief in the Savior giving all the glory to Him.

“Symphony” is a prayer that every part of the life we live will bring honor to God and be a symphony to His ears as we carry out the message of His love everywhere we go.

“Love One Another”, featuring Kevin Max, sets out to overcome the barriers that have been built up between people and even within the body of Christ. We should never forget that no human is perfect and we will all make mistakes, but showing the love of Jesus and reflecting the grace that we have been shown to those around us instead of tearing each other down over our differences can allow healing to take place and hope to shine again.

The melodic “Beautiful Story” tells of how God takes our fears, doubts & brokenness and turns them into something beautiful. The words of Romans 8:28 repeated within the bridge of the song remind that God is working in all things for the good of those who love Him.

“Fearless” recognizes that while we may be struggling through a dark or unknown place in life, we are never alone when we put our trust in God. It is definitely a personal favorite of mine from this record. The empowering lyrics combined with a musical backdrop that evokes a feel of readying for battle and moving forward in faith provides a cinematic-like experience. A great soundtrack to help prepare you to face something that scares you and reassure that the Lord surrounds you.

“This I Know” follows perfectly affirming God’s faithfulness and peace within His promises.

The deluxe version of United features four additional songs than the standard version, including the phenomenal single “The Cross Has The Final Word”, as well as an interview with Michael Tait & Peter Furler.

With themes of bringing people together, standing firm in your faith and finding strength & hope in Christ, United gives listeners a collection that is sure to become a favorite (and a classic!). Newsboys did a fantastic job melding the sounds of the earlier days of the band and the new while Michael Tait & Peter Furler sharing lead vocals works so well on these tracks. This album is a must listen!