for KING & COUNTRY ‘Burn The Ships’ 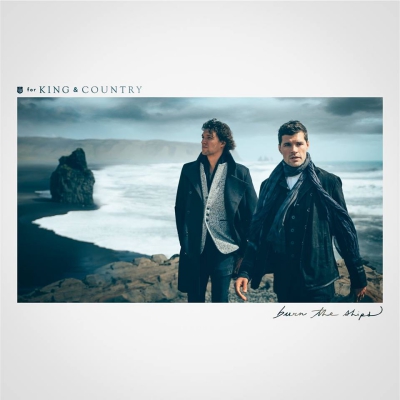 I’d like to start with a small tidbit and say I did not always adore For King and Country like I do now. My first experience with them was when “Proof of Your Love” was big on the radio and I absolutely HATED it. I couldn’t stand listening to it and would change the station or skip on Pandora every single time it came on. I just associated For King and Country with only that one song and concluded I couldn’t stand them and never would be able to. Soon after, they kept making more music and were growing pretty rapidly in popularity. So as I began to hear other more of their music, I actually began to like some of it and decided to give them a chance, and boy I sure am glad I did. Their music is filled with love, hope, the Gospel, fun and truth. With the release of their past album RUN WILD. LOVE STRONG. LIVE FREE. I became a fan and now with Burn The Ships I don’t think I could ever go back. I could listen to them talk for hours (hello Australian accent!) and never get bored watching them perform show after show.

I have been on the edge of my seat eagerly awaiting this album since I heard some of the new songs at a music festival over the summer and I am excited to finally get to share them with the world! With the anticipated release of Burn The Ships, and my personal favoritism of the band, I’d like to do a short synopsis of each song on the album. So here we go!

“Introit” – I’ve never quite understood the point of an introduction piece to an album and I can’t say my opinion has been swayed at all with this one. I almost feel the somber strings put a damper on the feel of the rest of the album, especially because it goes right into a super fun and upbeat song. Personally, I’ll be deleting it from my library.

“joy.” – Hello fun! I applaud them for trying to inspire some positivity in the seemingly overbearing negativity that we face day after day. I also appreciate that they emphasize the personal choice. It reminds us that happiness is conditional and worldly, but as Christians, we must make the choice to let Christ’s love and promises bring us joy. Plus, the electronic vibes of the song can string you along the process of “let[ting] it move you.”

“God Only Knows” – As soon as that humming begins, I get chills up and down my arms. Honestly, I close my eyes and take a deep breath and try to take a moment to focus on Christ.  When I first heard this song, I was in a giant field of people on a hill. They explained this was their attempt to bring a light to the difficult topic of depression, suicide, self-harm and things of the like. As someone who experiences some of these situations, it was a wonderfully weird experience to feel so much sadness accompanied by an outpouring of hope in one single song. It was like acknowledging and accepting the pain, hurt, lost, sadness, etc. of my present situations and feeling it all, but also being met with the love, hope and joy that we find in Jesus. I don’t know, I could go on for hours, but this song is fantastic and I think they did something really special by addressing such a tough issue without downplaying the seriousness, but still bringing positivity and hope to the situation.

“Amen” – Remember how I said I got chills with the last song, well they carry over to the chorus of this one. I just absolutely love the musical composition of this song. There are so many little touches that are like icing on the already perfect slice of cake. The strings mixed with drums mixed with hints of electronic touches must be the recipe for a killer song. Oh, and the overwhelming cry of “amen” sung by what sounds like an entire nation of people. I really like that because it reminds us of the brothers and sisters we have in Christ and how powerful of a thing we have together. This song is one of my current favorites.

“Burn The Ships” – I was presently surprised with this song. I was expecting something negative and violent for some reason, but I was met with a song of inspiration and hope.  The advice to “burn the ships, cut the ties… say a prayer, turn the tide, dry your tears and say goodbye… and don’t you look back” is something I want written on a sticky note and plastered everywhere as a constant reminder. I think we tend to overannalyze, get stuck in the past and dwell on the negatives in our life, but God wants so much more than that for us. Why do you think He calls us to leave our burdens at the foot of the cross? Thrown in the middle is an echoing organ tune that instantly transports you to church and gives you that opportunity to go to the feet of Jesus and turn over anything that’s holding you back from Him. I think it’s a fantastic title track song that represents the album as a whole really well.

“Fight On, Fighter” – In case you didn’t feel inspired and full of hope already, they’re going to sprinkle on some more encouragement to help motivate you to keep going. The chorus is another reminder that Christ is the source of the “fire [and] spirit inside” and as long as we have Him, we can keep pressing on. If you’re feeling down about yourself or thinking you can’t go on, I would definitely recommend listening to this song.

“Need You More” –The choice to have nothing but vocals is haunting yet powerful. The quick turn from upbeat and fast to calm and slow is like cold water being thrown on you in the middle of the night. All of the other songs of course are inspired by and mention God, but I am completely blown away that this drastic change of pace takes place at a song that is solely focused on God and our need for Him. The song is able to catch everyone off guard with something as simple as a change of pace in the music and captivate their attention while you deliver the most important message in the entire world; the Gospel. I applaud them to no end for this genius move.

“Control” – We are taken into a slightly more upbeat song that gives us the practical application of the realization of our need for Christ in the previous song. The chorus lists the stepping-stones of becoming a good Christian by making every aspect of us and our lives match up with God and what matters to Him. We have to give up our need for control over our lives and work on relying on and trusting in God, recognizing that we can’t do life on our own.

“Never Give Up” – The beat of this song that kind of sounds like you’re marching on and not giving up even though you want to. The reminder that “the best is yet to come” seems cliché, but it’s so true. We have the hope of Heaven to look forward to one day, which is going to be better than we could have ever imagines. The loud and echoing “NEVER GIVE UP!” sang throughout the song may seem simple, but remember where your hope and strength comes from.

“Hold Her” – What’s an album without a love song? Being a famous band requires a lot of touring and being away from home. This song outlines the reality they live in and the intimate prayers they have for their wives while being away. As someone who lived a long distance relationship for a year, I know how being apart can take a toll and be really difficult to deal with.  Even if you don’t have to spend time away from your spouse or family because you aren’t a touring artist or in a long distance relationship, I think the song can help you appreciate the struggle that artists, military, and others go through for our benefits.

“Pioneers” – If a simple love song wasn’t enough, they’re going to do a song featuring their wives too because how sweet is that? Christian couples who deeply love each other singing about the never-ending love our savior has for us is something I never knew I needed in my life. The vocals are complimentary and soft accompanied by a calming and simple music beat. The song is an impeccably beautiful way to end the album.

Despite almost every song being an upbeat, positive message, they are all uniquely different and it doesn’t feel like you’re listening to the same thing over and over. They have an unexplainable talent to talk about the most difficult of situations, like suicide and addiction, respectfully acknowledge the real pain, hurt, loss and other emotions that come with them, and offer hope and love in the most accepting, non-forceful and non-judgmental way. I’m not sure if that explanation gives justice to the overwhelmingly amazing album this is or the amount of joy and depth of love I feel from Christ while listening to it. I just love these guys. I think they emulate how a man should act while also showing people what good Christians believe and do. I know I only hear their music and see what they want to put on social media or what they present on stage, but I feel like they’re genuine and are amazing stewards of Christ. Overall, I believe the album is absolutely fantastic. The music is wonderful and the lyrics are impactful.  Burn The Ships is hands down one of the best Christian albums of the year.

More from for KING & COUNTRY: