Michael Farren ‘Fighting For Us’ 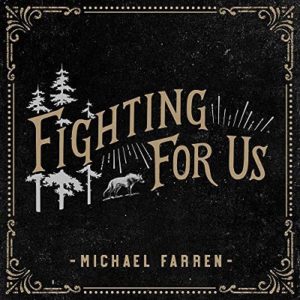 Life is a struggle from the first breath to the last, but we’ve somehow fallen under the mistaken impression that it’s our fight alone. That we have to grow up, man up, stand up, rise up, wake up, and shake up, all without looking up. While we advance on the battlefield with swords raised and guns drawn (or whatever weapon you prefer – how about a lightsaber?), armor secure and defensive walls raised, God looks at our pitiful self-preservation attempts and shakes his head. Instead of pushing to the front and leading our own charge, we must recognize that Jesus is already battling on our behalf. Michael Farren’s latest album Fighting For Us pictures a God who is ready to make war against every foe that dares to harm his children.

“I Belong To Jesus (Oh Hallelujah)” rejoices in being the property of Jesus through His sacrifice. A stirring hymn that revels in the exchange of our filth for His glory. Farren’s voice resonates with emotion as he sings of someday having an eternity to worship our Savior.

“Praise The King” attributes every promise God has kept to the resurrected Christ. Because He has achieved total victory over the grave, we can confidently walk into the heat of battle and the dead of night knowing He has already defeated the obstacles before us. Neither mortal witnesses nor death itself can deny that evil and death have been crushed.

The title track “Fighting For Us” declares that a God with power beyond any we could imagine is our constant champion, even when we know nothing of His labors. He has no limits and will do whatever it takes to fight our battles. It’s a loyalty like no other, born of a father’s unconditional love.

“Prisoners” paints us as former inmates of a jail we built with bricks of sin. With a jaunty tune, this song celebrates our jailbreak, courtesy of Jesus’ sacrifice. He knew we deserved our sentence and made a way for us to escape regardless. We are freer than we’ve ever been before.

“Always Have Jesus” recognizes that even when everything else we once relied on vanishes, one thing will remain; Jesus. Knowing we can depend on Him, we can find the faith to believe that we’ll get through even the most difficult circumstances.

“Goodness and Mercy” takes its inspiration from Psalm 23 as it details examples of God’s merciful acts toward us. He began to restore us before we realized our need of Him, and continues to refresh us daily, drowning out the negative voices that whisper lies in our ears.

“Where Is God” asks a question that probably everyone has wondered the answer to, especially when surrounded by trouble; where can I find Him? The answer, not surprisingly, lies in His children, those whom He dwells within. When we love others as He loves us, sacrifice everything, that’s when He shows up. God shows up in the form of His people, caring, giving, leading, loving. The song asks us to look around at all those who come to our aid and see God in them.

“Oh Praise (The Only One)” lifts praises to the only one who could ever deserve our accolades. Nothing can compare to this reality; that God lives in us, cleansed our souls, and whose salvation is sure.

“Come Alive (Dry Bones)” is Farren’s version of the song he co-wrote with Lauren Daigle for her debut album six years ago. Recognizing how the world views the battle between good and evil, we know that there’s more to the story than we can see with our natural eyes. So we petition the dead to breathe in God’s breath and revive into a force to be reckoned with.

“As It Is In Heaven” looks ahead to the place we were created to inhabit, with a desire to taste the glory and promises of God in this moment. Someday we’ll see the fullness of His splendour, but until we do, every glimpse is welcome. This song was also previously recorded by Alisa  Turner, who was one of the co-writers along with Farren.

“Loved And Known” assures us that every person God ever made was intimately cared for by Him, whether we soared or sunk. We might lose hope or feel abandoned, but we never have been. Though we may question whether God still wants to reach out to us, we’re not disappointed. The track concludes with a sampling from the first song, neatly drawing the album to a close.

In the middle of our biggest trials, we need not despair when our strength fails us. It’s a sure indication that the time has come to hand our burden over to stronger shoulders. Michael Farren shows us a God who can be depended on good days and bad days alike. Fighting For Us comforts believers with the knowledge that our Father is in our corner and in control.