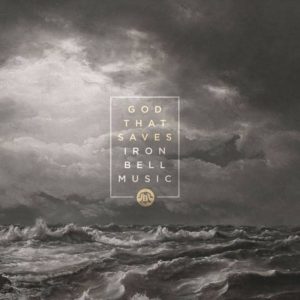 One of the most poignant images in Christianity is that of going home. It has a dual meaning for believers; the prodigal son returning from the far country to his father’s house, a picture of redemption, and the Bride being whisked away to her Groom to live in His presence for eternity, our life after death. Whether we have completed our labors for the day or for all time, we listen for the sound of a trumpet to call us to Him.

For now, however, the loud clanging of a bell summons us into His presence so we can be refreshed and renewed for the work ahead. With their new album God That Saves, Iron Bell Music invites us to lay down our shovels, our brooms, even our computers, and just rest in the Lord.

“God That Saves” testifies to the hopeless state we once found ourselves in, before God intervened, and how it all changed when He saved us. He infuses our souls with life and purpose, a gift that only comes to us through His grace. Beginning this album with a victory song reminds us why we’ve assembled – to praise Him for His undeserved love and mercy. “Your Love Is A Fortress” rejoicing vows to reject fear, because God holds all of our possessions in His hands. He is able to defend us from whatever armies rise up against us. His love grabs our fear by the scruff of the neck and flings it over the walls, never to breach again. It’s the kind of song that does as much to convince you of its words as it does to express them. “Belong To You” assures us that the One who now owns us is the only voice we need to listen to. Nobody can steal our salvation or remove God from our lives. We still need to be assured of this because we have a tendency to forget when lies assault our hearts. “My Confidence” vows to hold on to God as the ground beneath our feet quakes, because He won’t be moved. We can trust what He said will prove true no matter how things appear. He promises to strengthen and guide us in the darkness.

“Fall Away” pictures an intimate moment in the presence of God, waiting for Him to respond in His own, unique way. Anything other than God or His will, His leading, must be cast off and forgotten. His is the only presence welcome here. “Faithfulness” celebrates the constancy of God, though waves crash against the shore, and reminders of the past assail our consciences. Triumphs still await us ahead. The melody of the chorus climbs upward unexpectedly, like a fist punched into the air with the second line, as though one’s initial assurance gives way to a victorious cheer. “Burn For You” compares passion for God to the flames consuming a sacrifice, inviting God to set us ablaze and continuously feed the flames.  Every moment, our actions flow from the encounter we have with Him and reveal His glory.

“On And On” describes real love as comfort in times of emptiness, that doesn’t remember what it has forgiven. It never ceases, but continues throughout the ages. God’s love is the one source of illumination in the night. Though it is powerful, it is also humble unto the point of self-sacrifice for us. “Sons And Daughters” is a love song from God to us, His adopted children. He calls us to take the time to be with Him and receive His love for us, for we were created to rejoice in Him. The bridge reminds us that He looked for  us, His lost sheep, and paid a price that He believed was worth it to rescue us. “Free In You” celebrates our release from bondage by Jesus taking our scars and punishment upon Himself.  Fear doesn‘t keep us in captivity; instead, love holds us close. The broken are repaired, the divisions are struck down, and we can finally have freedom because of Him. “Your Face Is Beautiful” concludes with adoration, comparing God’s beauty to that of twilit skies and vast seas. Hearing Him speak makes our hearts blaze like the sun.

The passion hardship has quenched, lies have scoffed at, everyday tasks have set aside, insights have kindled – it all comes pouring out in a steady stream of worship, gratitude, and assurance. God That Saves blasts open the dam, flooding the dry plains of our lives with pure water that somehow only feeds the thirsty flames of our devotion. Iron Bell Music beckons us into the presence of God, weights laid down and work forgotten for now, emptying us of fear and filling us with power for the next day’s tasks.