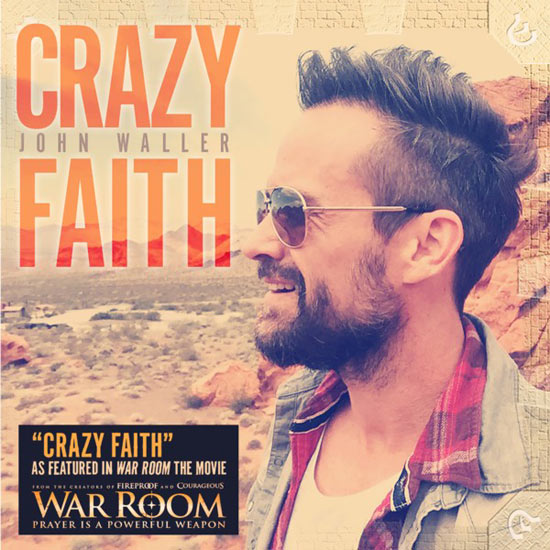 Faith. It’s small as a seed in a God bigger than the universe. It’s what prompted a broken woman to reach out for the hem of Jesus’ robe some 2,000 years ago. What pulled Peter out of the boat and onto the waves when the Lord beckoned. It’s behind the planting of every seed, the investment of every dime, the taking of every medicine. We believe that what we do will reap benefits far greater than we can imagine, and we refuse to back down, even if we appear insane to those around us. John Waller invites us to display Crazy Faith in our own lives, promising that we won’t be disappointed. “Crazy Faith (movie version)” reminds us that even when we’re frightened by the implications and costs of our acts of faith, we can find strength in God to leap. Some things can only be achieved by casting aside our inhibitions and following Him, even if what He asks us to do seems foolish. Waller uses the imagery of moving mountains and walking on water, some of the more absurd-sounding possibilities, to underscore the importance of disregarding our heads and hearts in favor of God’s perspective.

In “Love Has Spoken”, Waller tells of the ways that God spoke to him when he was desperate. We expect it to be a big, booming voice that leaves no room for other options, but it’s not. Instead, it’s a still small voice that we have to listen for. Furthermore, God’s love removed the power of death with His words and reserved us as His own. “Life Is A Gift” encourages us to look at every precious aspect of our lives as gifts from God, giving a few examples such as children’s laughter and sunlight. The more we change our way of seeing, the more pieces we fill in to our picture of God’s goodness. The miracle is that we get to enjoy these wonderful blessings despite being undeserving. “I Know My God” points us in the direction of God, instead of lies and trials. If we have a deep understanding of and relationship with God, we can hold on in spite of the way circumstances appear, in spite of the way we feel. In “Forgive Me”, Waller takes his foot off the accelerator and becomes molasses, humbly pleading for forgiveness and cleansing from God. He marvels at God even staying close to him when he deliberately goes astray again and again. The kind of song you might feel awkward about, as though you were eavesdropping on a private prayer. But maybe not, if it hits close to home.

“Epic” compares the immensity of God with our infinitely smaller selves, and asks what we could possibly give Him. How could He even see us? Taking inspiration from “How Great Thou Art”, Waller praises an epically awesome God, in unison with every other creation He has made. “Orphan” triumphantly tells the story of a little girl who’s asking God for a family, and how God touched someone’s heart to take her in, which she repeats by adopting a little boy when she grows up. Jesus listens to the prayers of the orphans and answers them in the most unlikely ways. He looks upon all of us as orphan children that He took in. “Rain” pictures the future in heaven, where Jesus will reign forever. No tears, no death, no pain will be there; instead, billions of faithful saints will rejoice before Him. We’ll see those who have gone before us and be healed.

“Your Word, My Life” expresses a desire for cleansing from shame, by hearing the word of God. There isn’t anywhere else we could conceivably go and find life except to His word. By spending time in His word, we can receive revelations about God’s character. Aside from these songs, there’s a second version of the title track (“Crazy Faith (adoption version)”), as well as live acoustic versions of three songs from his previous albums. (“While I’m Waiting” “Our God Reigns Here” and “As For Me and My House”). Are you willing to put everything on the line? To open yourself up to the possibility of censure, humiliation, defeat, even death in your pursuit of obedience to God? If your answer is “Yes”, then you’re in good company. If it’s “No”, or more likely “Not yet”, maybe a little Crazy Faith is exactly what you need to get you going. As usual, John Waller does not disappoint.