Jonathan Cain ‘The Songs You Leave Behind’ 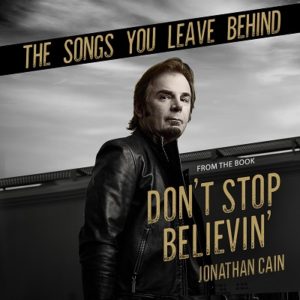 Legendary singer/songwriter Jonathan Cain is perhaps best known as the keyboardist and rhythm guitarist of the band Journey. In recent years, Jonathan has used his voice to share his faith and inspire. His new album, The Songs You Leave Behind features songs that provide a glimpse into Jonathan’s life and career corresponding with the release of his latest book Don’t Stop Believin’: The Man, the Band, and the Song that Inspired Generations.

“The Songs You Leave Behind” uses aspects of the life of a musician to encourage listeners to live in a way that embraces all of the moments, from the highest of highs to the lowest of lows, so that you can look back and be content with the choices you’ve made and the impact you leave behind.

“Better Man” acknowledges the difference that faith and a relationship with Christ can make in a believer’s life as they allow God’s love to truly change their hearts and open their eyes.

“Back To The Innocence” reminisces about simpler times before the world and pressures that come with an adult hardened the heart and dulled the hopeful spirit we’re all born with. It reminds us to look inside and find the childlike faith we once had.

Likely inspired by the tragic fire that swept through Jonathan’s elementary school when he was a child and claimed the lives of many of his fellow students as well as school staff members, “The Day They Became Angels” vows to not let them be forgotten and to carry on their legacy.

“Take These Ashes” follows with a prayer for the Lord to rebuild the spirits and turn tears of brokenness into something new and beautiful.

“God Gave Me You” celebrates and gives thanks for a love two people share as God brought them together at the right time so that they could experience life and serve their Savior together.

Combining elements of pop, easy listening, gospel and country, The Songs You Leave Behind presents a collection of songs that depict life in several stages from childhood to adulthood and coming to terms with the decisions, failures and successes that brought you where you are. As alluded to above, the album plays as a soundtrack to Jonathan’s book adding another layer to the stories he shared in that while also giving insight to the many ways faith was prevalent through it all.