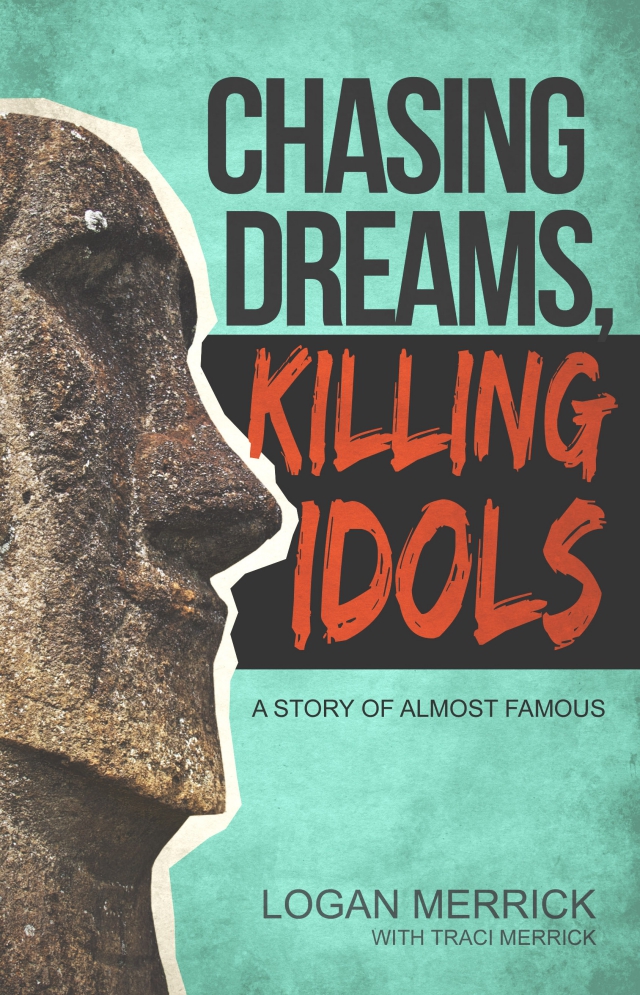 Very rarely do we catch a glimpse into the true lives of Christian musicians in a way where it leaves you thinking “Wow. That can happen in Christian music?” I have worked in the Christian music industry for well over a decade now and I can say I have seen and have been a part of amazing things. But I have also seen the darker and more secret side of the industry as well. When money, power and other idols step in and rear their ugly faces and show us that through it all, even as believers, we are still errant, fallible beings that are destined to mess up.

Logan Merrick, a youth pastor in Mena, Arkansas and former drummer for the once up-and-coming group Letters From Patmos takes us on his own personal journey in his first book Chasing Dreams, Killing Idols. After reading through the pages of the book, I found that not only did it offer a glimpse into the behind-the-scenes part of everyday life as a band, but the more darker and often times hidden aspects of it. Knowing what I know in Christian music, this is actually the first time I have read someone being so transparent and honest about a world that most fans see as serene and exciting. I first met Logan back in September 2011 when we had them play for our youth group at the church I was attending at the time. I remember Logan sharing his personal testimony and I was blown away at what God had done in his life. It truly was an inspiration to me personally. After the show I came up to them and told him “You guys are the real deal and I can easily see you being a signed band playing the country someday”.   How right and wrong I was. Logan chronicles his journey with the band from playing small youth groups (like ours) to playing alongside veterans of CCM and coming within grasp of that coveted record deal. In a no-holds barred fashion, Logan lets all of his secrets and mistakes out. Whether it was his demeanor and attitude when things started going to go south quickly with the band, to questioning his very faith in Christ.

Through the trials and tribulations that Logan endured, he still allowed God to seize control and steer him where he needed to be. His goal here is to allow his past mistakes be a learning tool for others, so as not to make the same mistakes he did. I think we can all glean something from the pages of this book. So many nuggets of wisdom in here, and full of scripture references to help put things in perspective. Not only is the book an inspiring and fun read, but its proceeds go to benefit programs that help combat child sex trafficking, which is desperately needed right now.

In closing, this is an amazing book and one that I would highly suggest picking up and reading for yourself. True honesty is what makes this such a good read. Being honest to yourself is just as important. Sometimes the hardest thing to do is admit you have failed God. Idols aren’t just physical objects, but anything that prohibits you from giving God your all. Chasing Dreams, Killing Idols gives the reader an inside look at the Christian music industry and how good intentions and dreams can quickly become idols in their own right. Author Logan Merrick’s raw honesty and the way he deals with his struggles serve as an inspiration to anyone battling idols and offers an effective solution to get your walk with Christ back on track. Read more about Logan and his thoughts on his official blog at http://loganmerrick.wordpress.com