Paul Baloche ‘For Unto Us: Christmas Worship Live’ 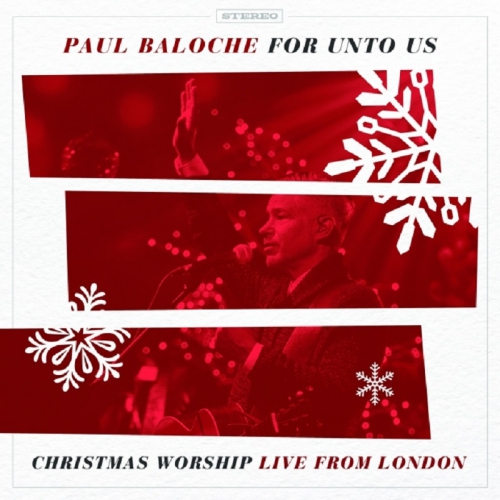 To celebrate the season of redemption’s promise and hope’s birth, Paul Baloche releases For Unto Us: Christmas Worship Live. Several of the tracks pair Christmas carols with worship songs for all seasons.

“Hark The Herald Angels Sing/King of Heaven” has a rousing beat from the very first, courtesy of the audience’s clapping hands. After telling of the angels’ message of good news, the track addresses Jesus, welcoming Him to our midst. “Angels From The Realms of Glory/Emmanuel” continues to roll along quickly and joyously, reminding us that it’s not merely a story from the past, but a reason to worship in the present. It serves essentially the same function as the previous track, so I wonder if maybe they ought to have been separated by a couple of tracks to make that less obvious. “Joy To The World/Our God Saves” turns down the dial a little on the speedometer, but a steady beat still underpins it. The second song emphasizes the reason for our joy; His salvation has come. The verse usually beginning with “He rules the world” changes all of the “He”s to “You”s, addressing Christ directly.

“For Unto Us A Child Is Born/Open The Eyes of My Heart” almost seamlessly transitions from the verse of one into the chorus of the other. There’s a bit of sleigh bells in the background, but not much else that distinguishes it as a Christmas song. You could be forgiven for having more of a sense of the latter song than the former. “Your Name (Christmas Version)” recounts Jesus’ coming and reason for doing so in a different first verse, before continuing with the original first verse. A bridge mentioning the prophetic passages from Isaiah regarding Emmanuel is a nice touch, as are the vocals from a female singer who shares this track with Baloche. “Christmas Offering” is a song that I first heard on Casting Crowns’ Christmas album Peace On Earth. The song speaks of us laying down offerings to Christ at Christmas time, much as the wise men and shepherds gave their worship and material gifts.

“O Come All Ye Faithful/We Adore You” is arranged like a march, drum rolls and all; music for the pilgrim’s playlist on the road to Bethlehem. The second song in the track portrays us as having arrived and worshipping before Him. “This Is Love” defines love as the gift Jesus gave to us on Christmas and ultimately, Good Friday; the gift of Himself – His presence, His sacrifice. The song includes lyrics from “Come Thou Long Expected Jesus” as well. A rendition  of “Silent Night” follows that tries to distinguish itself by changing the tune of one of the verses. On the one hand, it makes you sit up and take notice, but it may also be a little distracting for some. “Peace On Earth” draws the album to a quiet close, in a prayer of surrender, repentance, and worship. Longing for God’s peace, we recognize that God’s love can and has taken down the barriers between us and brought us together. May He bring peace to everyone through His power and love.

For Unto Us revives the spirit of worship present in traditional Christmas hymns by matching them up with more contemporary lyrics. Paul Baloche gives us a pleasant soundtrack for Christmas eve by the fire in the presence of Jesus.