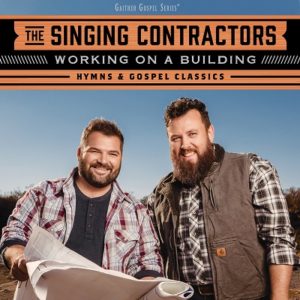 Social media can be both an incredibly useful tool or the cause heartache and pain. Thankfully, when it is utilized in a way to spread positivity and feel-good moments, it can be another way God uses everyday people to reach the masses with His love. I remember the day that I was scrolling through Facebook and happened upon a video of two men, appropriately dubbed The Singing Contractors, who paused from their work remodeling a home to take advantage of the acoustics that the unfinished building provided and sing “How Great Thou Art”. Little did Aaron Gray and Josh Arnett know that their video would reach over a million views over the course of just 24 hours. The men’s striking vocal talent & personable attitudes led to many more views and other videos since as well as the recording of two independent albums and now their national debut with a live collection in conjunction with the Gaither Music Group, Working On A Building: Hymns & Gospel Classics (Live).

Among the gospel favorites included on this project, the pair lend their smooth harmonies to such classics as “Working On A Building”, “Amazing Grace”, “Because He Lives”, “It Is No Secret” and “In The Garden”.

“He’ll Take Care Of You” reminds listeners that the one true answer to the questions, fears and pain that plague us can be found in a relationship with God. He will fulfill His promises to never leave us alone and heal our hearts.

“Wine Into Water” is a heartfelt prayer of someone who realizes that their choices and the consequences of them have led to a serious problem that needs the intervention of the Heavenly Father to help redirect their steps and give up the bottle that has taken away much more than it could ever give.

A few songs later, “There’s Always A Place At The Table” reminds that no matter how far we think we have fallen or strayed from the Lord, He longs for you to return to Him. When we turn to the Savior with hearts willing to follow Him, there will always be a place for us in Him.

Aaron & Josh also included their moving rendition of “Mary Did You Know?” which carries a message of hope that reaches beyond the Christmas season.

“How Great Thou Art” closes the album with the song that was the first many had heard from the duo. This version has an arrangement that is set apart from other recordings of the familiar hymn.

There’s no doubt that The Singing Contractors inspire as they use their God-given talents to serve others both with music and through putting in an honest day’s work of construction. Working On A Building: Hymns & Gospel Classics (Live) showcases strong vocal performances and a clear desire to encourage listeners spirits and point them Heavenward.

More from The Singing Contractors: