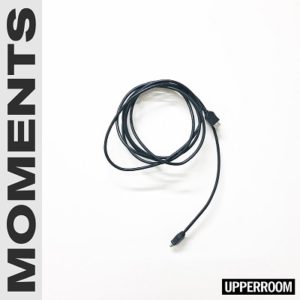 Some of the most beautiful experiences in our lives are not planned and prepared for by us. Rather, they spring up out of the ground like unexpected flowers, taking us by surprise and making us catch our breath. UPPERROOM’s Moments features songs which originated in worship, blossoming in the souls of the hearers.

“Tremble” calls upon Jesus to scatter the tempests surrounding and consuming us. He is so powerful that evil quakes before Him and fear is frightened into silent submission. Once these are dispelled, we are revived with His spirit to rejoice again. Abbie Simmons adds a touch of gravel to her vocals, giving the song a bit of strength to contrast with the tender awe of its lyrics.

“Adoration” considers several aspects of the crucifixion and the incarnation, marveling at His humility and compassion. Christ’s glorious attributes and actions earn praise and honor from the lips of His people. Meredith Mauldin’s voice soars with passion.

“Defender” describes the Lord as a warrior who rushes into battle before we even realize that we’re fighting one. We need only lift our voices in praise and surrender. Once again, Simmons balances the strong and the sweet, reminding us that His methods are better than ours.

“All Hail King Jesus” brings us to the moment where Jesus offered His life up as a sacrifice to purchase our freedom. Standing there, you might have believed that the story ended with His death. The earthquake might have caused you to question it, but the stillness of the tomb would appear to echo with finality. Until He rose. SarahBeth Smith’s voice rings with reverence for our King, Lord, and Savior.

“Surrounded (Fight My Battles)” closes with a powerful reminder that the only way we will be victorious is to recognize that the Lord surrounds us on every side; even when the enemy camps around us, He is a wall of protection for us. Elyssa Smith gives life to the song’s simple lyrics, infusing them with courage and strength. The music swells with increased intensity and seems to run circles around us, surrounding our hearts and minds with assurance.

As though a door opened before us, UPPERROOM transports us to an intimate setting in the presence of God, transforming our point of view. Moments gifts listeners with courage, strength, and hope.