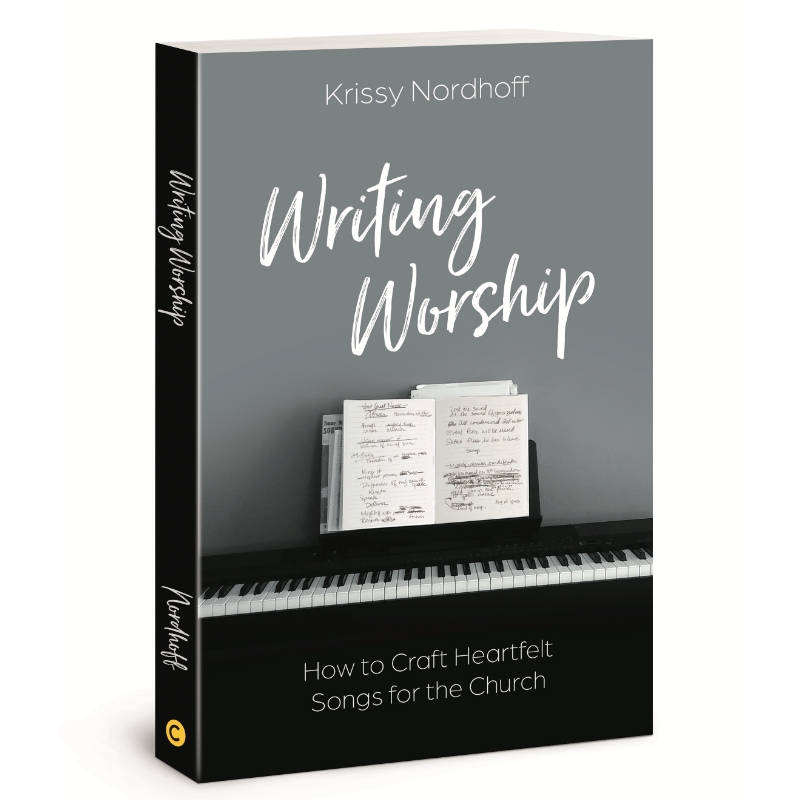 Much has changed about the writing of songs since the days of King David. Whereas before, it was limited to poets and musicians, music has now become a multi-billion dollar industry hinging on catchy buzzwords, glamourous faces, and trendy sounds. Songs move in and out of vogue, and performers with them. To some extent, that’s even true in the Christian music scene, where styles and sounds similar to what’s popular elsewhere often show up shortly after their secular counterparts garner attention.

Many songs are written for airplays, for a specific group of listeners, for money, or simply to fill up the empty spaces on an album. But there are those rare compositions which both speak to the depths of our souls and demand a reply. Songs crafted to bring glory to God and draw people toward Him in worship require a deeper understanding of His word, His nature, ourselves, and those around us in order to have an impact on the hearers and singers. In Writing Worship, acclaimed songwriter Krissy Nordhoff gives would-be songwriters an action plan to follow in order that we too might create songs full of meaning and hope.

Nordhoff begins with a bit of personal background, showing how music was a recurring theme from her early childhood years, how it sustained her as she found her voice. She reminds us that though the world is filled with songs, there will always be room for more, as seasons change and the church with it. Next, she gives a list of common characteristics shared by worship songs, acknowledging that they are by no means hard and fast. Citing four essential coordinates for a good song’s starting place – honesty, love, discipline and sacrifice – she tells the story of the song she is perhaps most well known for, “Your Great Name”, sharing how it was birthed out of her battle with long-undiagnosed Lyme disease, which she was ultimately healed of.

Nordhoff then introduces the concept of two-way journaling ; keeping a diary to record our thoughts and questions, as well as the answers we believe God is speaking to our hearts. She encourages us to identify the stumbling stones on our pathway and clear the way by becoming aware of who we are in Christ. Next, she leads us through the various categories of a songwriter personality test (which can be taken online) in order that we might determine what our strength is, what we need to work on, and who we ought to co-write with. She then introduces us to psalming – singing the psalms in order to get a feel for their structure and see what phrases catch our attention.

The concept of song mapping is introduced as a way for writers to brainstorm ideas before organizing them into words and lines, as well as various techniques that can be used to make the message more memorable, beautiful, and meaningful. Next, Nordhoff delves into the practice of co-writing, including where to begin; how to understand and cooperate with fellow writers of differing personalities; what a typical session may look like; and important dos and don’ts, including how to gracefully disagree. She encourages us to to take a second look at our own work, to find room for improvement based on the writing principles discussed earlier. We are also reminded that our songs have a purpose that reaches far beyond what we can see, whether they are meant for God, God and us, other people, our church, or the world, sharing her fascinating ancestral connection with the message of “Your Great Name”. Lastly, she sends us off with her benediction, in the sincere hope that we will take what we’ve read and put it into action. A helpful list of resources, including opportunities for further craft development and interaction, is included at the back of the book.

Being an aspiring songwriter myself, I requested a copy of Writing Worship to review, hoping to benefit from Nordhoff’s advice and experience. Within its pages, I was reminded of things I knew and surprised by ideas I hadn’t considered before. For anybody who’s never put pen to paper or fingers to keyboard in pursuit of worship, Krissy Nordhoff offers an excellent overview of the process and the purpose of making church music. Veterans, on the other hand, will learn a few new truths and rediscover old ones they might have forgotten. The pages of her book continuously direct us to promises older than time itself, inscribed on the hearts of the saints who have gone before by the One who created us in His image, creativity and all.