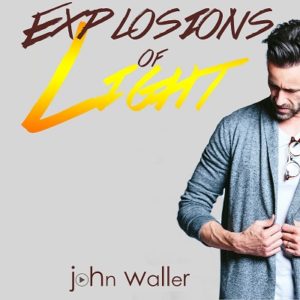 From the first time I heard John Waller and his 2007 major label solo debut The Blessing, I could honestly tell you that he had garnered a fan for life.  There was so much honesty in the lyrics and just the similarities to my own walk with Christ and life in general was downright amazing.  It’s as if John had caught a glimpse of my life and the personal issues that I had faced and created songs from them.  I soon found out by getting to know him, that is was his own personal conflicts and life journey that he has put into his music over the years. It comes from the fact, and he will be the first to admit this, that he’s just like the rest of us.  Imperfect.  Flawed.  Human.

When you have access to and listen to new music as much as I have over the years, you can often times be inundated with it.  Sadly though many of the songs and albums I have heard in the past fourteen years can come across as cliché and sound too much alike.  That’s why John’s newest and sixth solo record Explosions of Light, will continue the trend of hitting home with listeners.

Many of the songs from the new record have been recorded for a couple of years now, but have sat in musical limbo while he toured relentlessly and waited on the LORD to reveal the next step.  Much like the prayer and fasting that came as a result from writing his hit song “While I’m Waiting” (featured in the 2008 Kirk Cameron film, Fireproof), John came to a point in his life where he wondered if music was what God wanted him doing.  After all, when the Lord called him to move him, his wife and nine children across country from their home in Northern Georgia to small city of Yuba City, just north of Sacramento, California, as a worship pastor, the foreseeable future of music was up in the air.  After prayer and a little nudging from friends, including the album’s producer Ian Eskelin, Waller managed to put the finishing touches on what would become Explosions of Light.

The pop-worship tune “You Say I Am” starts off the record on an upbeat note, declaring our identities in the LORD and our pricelessness to Him.  We can take him at His word as LORD that we are through Him who He says we are. We are priceless. We are adopted by the LORD of all.  “Because You are who You say are / Who I thought I is blown apart / Because You are who You say you are / I am I am / Who You Say I am”.  The song really paralleled the message found in one of Waller’s earlier songs from The Blessing called “Identity”.  We need to not worry about who we think we are, because through Him our identity is made known.

The title track really sets the tone for the project with its proclamation of Jesus being the Light of the World (John 8:12) and wherever He is present, there is ‘explosions of light’.  The song was actually the last one added to the project and came inspired by both a quote from Passion City Church pastor Louie Giglio along with a writing retreat that Waller took in the mountains of northern California with producer Ian Eskelin.  The song is great in highlighting that no darkness could overcome the illumination of the light of the Savior.

“Awakening” is probably one the most entertaining and unique songs that I have heard in my time covering Christian music.  Whether most of us admit it or not, as Christians, there are really only two important aspects of being believers.  Our daily love and need of Jesus in our lives and of course that need for caffeine.  Okay, well the second part may not be the the most important thing aside from Christ in a Christian’s life, but is for me. J The essence that Jesus is our “caffeine” and the one who we should get up in the morning to is a great parallel to having that ultimate inspiration in life.

“Mama’s Prayers” is probably the most intimate song on the record.  A light acoustic number where John shares his own personal story of a ‘praying mama’.  While the song could be an ode to any godly mother and their ceaseless prayers on behalf of their children, the prayers of John’s own mother are chronicled in the song, as a way of thanking her for not only the prayers and patience, but the sacrifices she made to get him to where he is now.  This is the second song (the other being “Heaven Just Got Better”) which pays tribute to John’s late mother Joyce Waller, who passed away suddenly in 2011.  The chorus is tear invoking.  “Mama’s prayers saved my life / Mama’s prayers in the middle of the night / On her knees in an all out fight / for a child / Mama’s prayer for the wayward son / And now the prodigals returned / and I thank God He heard mama’s prayers”

I remember first hearing the song “Mine” about a month or so before John had recorded it for the record.  A playful, yet serious look at the joys/pains of being a parent.  He told me the story behind it during an interview one time in 2017.  A rambunctious 2-year-old who declared the pocket knife he had just snatched from dad as ‘mine’ and the time he found out that his then 13-year-old daughter had been texting a 16-year-old boy.  Nope.  Not today.  Stubborness can often get the best of us even as adults, and it’s these times where the Lord has to remind us who’s in charge.

John has often times had songs within his musical repertoire that parallel each other, like mentioned above with “You Say I Am”/“Identity” – “When God Says No” carries a similar message as the song “Yes” from his 2011 record As For Me and My House did.  When God promises something, we can believe it and take Him at His word.  But even at those times where we think it’s a ‘yes’, God speaks and says ‘no’.  We have to believe and have faith that He has the best laid plans set out for us.  That is hard sometimes, but that’s why God is God and we are not.

“Good News” is a song that I absolutely love.  I had the privilege of hearing the song performed live only a few days after John wrote it with 7eventh Time Down’s Mikey Howard in 2017 while on the God Is On The Move tour.  Much of the track was recorded while on that tour, with Mikey breaking away between sets recording and mixing the track.  The song highlights God’s faithfulness and reiterates His promise from Matthew 28 to ‘never leave or forsake us’, that all of that and more is ‘good news’. Amen!

“I Choose You” is the oldest song on the record, originally written by John, Scott Johnson and Jason Hoard in the early 2000’s while leading his indie group According to John.  While the song was recorded at the tale end of that band’s time together and later recorded and featured as the title track for Point of Grace’s 2004 record of the same name, it was never prominently featured on any of John’s solo works.  In an upcoming interview with John, I point out that I had mentioned several times over the years that I thought it would be really cool if he went back to re-record that song. Saying he never “thought it was the time”, he decided in 2017 that it was something that needed to be gone back to and revisited and I am glad that he did because I feel it really accentuates the message of the record as a whole.   Choosing to follow after and serve God rather than other idols the world places on pedestals is a timeless reminder and one much needing to be observed and pointed out in today’s fallen society.

“Here’s My Yes” closes out the record on a high note.  John has had, in my opinion, a great career as a singer-songwriter and he knows that undoubtedly that the LORD is the reason that he has been blessed throughout that time.  His declaration of devotion and servitude to the LORD is the message of this song, which culminates and brings to close an album that many, many times points back to the Creator God, the one who is the author and finisher of our faith, the one true God.  He is the One we should always have our eyes and our hearts focused on.  The hymn “Tis So Sweet To Trust In Jesus” are also intertwined within the song, which adds a nice touch. We need to bow down to God and give Him our “yes”, as we yield and strive to live our lives for Him and Him alone.

In closing, I can say that once again John Waller has proved that his music can continue to have a tremendous impact on listeners.  Having been a friend of the Wallers for over a decade now, one might say that I am a bit biased, but I can honestly say that if you are seeking a record that’s message can relate to you on a personal level, Explosions of Light is that record and one that I believe will bless and encourage you.

Catchy both musically and lyrically, the album will not only put you in a worshipful mood, but it will go far in reminding us of who we are in Christ.  It can also show you that, whether you are a cashier at the local grocery store, a school bus driver or a kid from Georgia with ADHD, anxiety and depression, God can still use you in mighty ways if you allow Him to.  Explosions of Light, in my opinion, makes a huge splash into 2019 and I hope that this is only one of the many records that come out this year that have the potential of making an impact in a world that desperately needs Jesus.