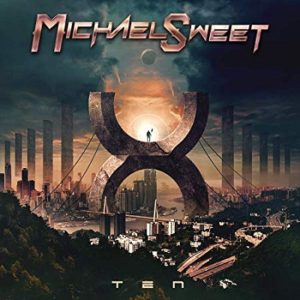 For the past 36 years, singer-guitarist Michael Sweet has fronted the iconic and legendary metal band STRYPER, and in that time he has also managed to release several solo efforts as well – ten to be exact. So it comes as no surprise that his latest solo effort comes with a rather simple name – Ten. Pretty ingenious huh?

When artists release new records, there’s always that notion out there that “this record is even bigger than the last” and in the case of Michael’s new solo album, Ten, that definitely is the case.

Unlike past efforts, with a collaboration here and there (past collabs include dcTalk’s Kevin Max; Electra Mustaine and up-and-coming artist, Moriah Formica), Ten has a featured musician on every one of the twelve tracks, with the exception of one.

The album starts out with “Better Part of Me”, the first taste that we had gotten of the record upon the announcement of the new music. The track features Jeff Loomis of Arch Enemy, the female-led metal band out of Sweden. The message of the song touches on the daily battle we face as believers, of overcoming the desires of the flesh and allowing the Holy Spirit within us to take over. Musically, it’s also one of the most melodic tracks on the record, with some blazing solos and duel harmony guitars.

Another melodic metal track with a great message is “Forget, Forgive” featuring former Alcatrazz guitarist Howie Simon. Simon’s shredding guitars really add depth to Sweet’s own instrumentation and soaring vocals, really giving it an 80’s metal vibe familiar that most Sweet/STRYPER fans will recognize. The message on this one is important, yet simple. So many times, we hang on to things which divide us and unless we see it fit, forgiving and forgetting can became quite a task. But, in these instances we remember that since it was God who through Christ has forgiven us, we must also reciprocate those actions to those around us, whether we feel it’s merited or not.

One of my favorites on the record would be the title track “Ten”, which features another example of stellar guitar work from Fozzy’s (WWE legend Chris Jericho’s band) Rich Ward, also known to his fans as “The Duke” from his Stuck Mojo days. The emphasis on the song focuses on Ten Commandments and one’s desire to keep them in daily life. While ten can also refer to giving 100% to the Lord, while following His prime list of principles which to live life by, the simple rule is just observing all, because as Scripture points out, you break one, you are guilty of all.

“Never Alone” is another favorite and one or two tracks to feature Whitesnake guitarist Joel Hoekstra. In my latest interview with Michael, he says not only is Hoekstra a great friend, but one of the most versatile guitarists he knows, being able to play anything from country, to pop, to hard rock and metal. Hoekstra’s six-string talents shine through on “Never Alone”, while Michael’s heartfelt lyrics remind us that no matter how isolated and lonely we may feel in life, God reminds us constantly in life and in His word, that we are never alone.

With so many top notch tracks on the record, the other one I wanted to highlight here is the closing track “Son of Man”. Sweet employs the talents of Queensrÿche’s Todd La Torre (also a fellow Tampa-area local), in my opinion one of the most prolific vocalists in hard rock/metal. The song’s message talks of the return of Jesus and the importance of seeking Him before the end. I think the one thing I like most about the Sweet/La Torre duet on the track is that they truly compliment each other more than any other duet I’ve seen recently. It’s a brilliant way to put the finishing touches on a flawless and epic record.

In closing, Ten is a solid rock record with a simple yet, inspiring message. Like his work with STRYPER, the new record goes far in showing fans that he has no intentions of taking it easy anytime soon. A tour-de-force of metal instrumentation and soaring vocals, Sweet proves himself to be likened unto an aging wine, only getting better with each passing record. Ten will definitely stand the test of time and can easily fit in among the echelon of mainstream rock’s biggest albums, proving that you can still follow Christ and rock it out like the best of them.