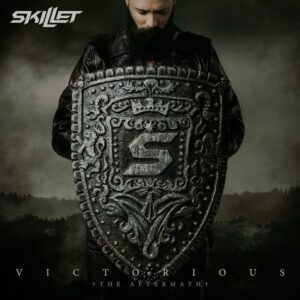 When Skillet released Victorious in August of 2019, listeners were treated to a collection of hard-hitting rock anthems that have only grown in relevance as the times we face become more testing of our faith. I originally reviewed Victorious and now with the deluxe edition, Victorious: The Aftermath, I’ll be expanding on that review to include the new tracks and remixes.

“Legendary” sets the tone for the album with an empowering track that calls us to never give up and to own our God-given identity as we strive towards the life He has called us to, standing strong in our faith through everything that tries to hold us back.

“Victorious”, searches for hope and guidance through a lonely time of desperation realizing that there is more to life than the pain & depression that has plagued you. With the help of the Savior and trust firmly placed in Him, you will rise victoriously over the enemy’s enslavement.

“Save Me” is an urgent prayer of someone seeking deliverance from the darkness & anxiety that’s causing them to shrink back into themselves, feeling like no one cares or could ever understand the war that’s raging inside. When we’re afraid to show anyone else what’s really going on underneath the surface for fear that they’ll turn and run, there is One that we can always call out to. It still won’t be easy, but God sees what’s happening in our heart & mind and will answer when we call on Him and believe.

“Terrify The Dark” finds peace in knowing that the light of Jesus is able to overcome the darkness of life that surrounds and consumes you. The power of His name will drive out the shadows and replace your doubt & fear with His truth.

In the same vein as the band’s smash hit “Stars”, “Anchor” tells of clinging to the Lord as the constant source of calm in the midst of a storm. The lyrics recognize that we’d be completely lost without the grace and love of our Heavenly Father holding onto us.

“Back To Life” cries out for change when you see that you’re becoming someone you don’t even know as you spiral down into a seemingly bottomless grave. A genuine desire to reclaim what the enemy has stolen from you and embrace your identity in Christ is a necessary step towards being set free from the chains keeping you bound to the anguish of the past and overwhelming worry that weighs so heavily on you.

Before getting to the new tracks, I have to say that as I’ve listened to the Victorious album countless times over the past year, “Terrify The Dark” & “Victorious” have been two of my ‘go-to’ songs from this project and both have taken on an even deeper meaning with their messages of overcoming the darkness and the battles you face with your faith planted firmly in Jesus knowing He is on your side.

The first of this extended edition’s new offerings, “Dead Man Walking”, has a sound and lyrical elements that almost remind me of Skillet’s massive hit “Monster”. The message points out how we can be “dead” inside until we allow God to breathe into us and truly bring us to life.

“Dreaming Of Eden”, originally released as an exclusive track in conjunction with the Eden: A Skillet Graphic Novel, this song tells of a longing for the peace that God originally intended for the world when He created it and will one day have in heaven. Until then, we can trust and believe for God’s work & will to be done here on earth.

As I mentioned, the album’s title track, “Victorious” is a favorite. The soundtrack version included on The Aftermath boasts a slightly slower musical backdrop, minus the electric guitar shreds in the original, which in my opinion adds to the powerful emotional response it evokes.

The Destiny Remix of “Legendary” is an interesting take on the song lending a more electronic/sci-fi sounding vibe.

“Save Me (Reimagined)” features a stripped down, piano & strings driven arrangement that gives a cinematic tone as it builds throughout the track.

The Falling Deep Mix of “Reach” also leans into the piano and strings, as well as a pleasant twist of having Jen Ledger take the lead vocals on the second verse. This rendition is well done and the musical & vocal arrangements compliment each other in a great way.

While at first listen it’s hard to hear much difference between “Terrify The Dark (Reimagined)” and the original, this remix seems to smooth the edges of the track. It may be a subtle change, but this is still a personal favorite of mine and I think if I were to suggest one song from the album to someone, it would be either version of this!

I stand by my previous closing comments on this album in that from start to finish, Victorious gives listeners the rock edge that Skillet has become known for with songs that feature raw, open and honest lyrics that many can relate to all while directing back to our Savior as the One Who holds the key to finding the peace within the madness. I know there are some who don’t get excited about bands throwing multiple versions of the same tracks onto an album, but I personally love hearing the creativity that can come with remixes, acoustic and reimagined versions of songs as many times it can give you a different perspective on a song you may have heard a hundred times. Without a doubt, the additions to Victorious: The Aftermath are well worth it! With the majority of the project being produced by John & Korey Cooper, longtime fans, AKA Panheads, will be glad to hear the signature sound of pulsing guitar riffs & drum beats that drive the message of the songs home.