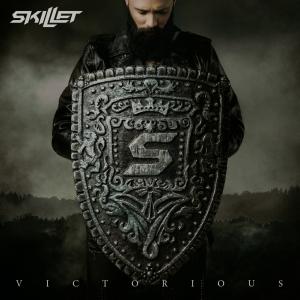 The highly anticipated new release from Skillet, Victorious, seamlessly blends old school, heavy rock anthems with mainstream as it brings messages of seeking hope in the midst of pain and facing challenges head on knowing that you have the power of Christ that has overcome death living in you.

“Legendary” sets the tone for the album with an empowering track that calls us to never give up and to own our God-given identity as we strive towards the life He has called us to, standing strong in our faith through everything that tries to hold us back.

“Victorious”, searches for hope and guidance through a lonely time of desperation realizing that there is more to life than the pain & depression that has plagued you. With the help of the Savior and trust firmly placed in Him, you will rise victoriously over the enemy’s enslavement.

“Save Me” is an urgent prayer of someone seeking deliverance from the darkness & anxiety that’s causing them to shrink back into themselves, feeling like no one cares or could ever understand the war that’s raging inside. When we’re afraid to show anyone else what’s really going on underneath the surface for fear that they’ll turn and run, there is One that we can always call out to. It still won’t easy, but God sees what’s happening in our heart & mind and will answer when we call on Him and believe.

“Terrify The Dark” finds peace in knowing that the light of Jesus is able to overcome the darkness of life that surrounds and consumes you. The power of His name will drive out the shadows and replace your doubt & fear with His truth.

In the same vein as the band’s smash hit “Stars”, “Anchor” tells of clinging to the Lord as the constant source of calm in the midst of a storm. The lyrics recognize that we’d be completely lost without the grace and love of our Heavenly Father holding onto us.

Closing song, and one of the collection’s most hard-hitting musically, “Back To Life” cries out for change when you see that you’re becoming someone you don’t even know as you spiral down into a seemingly bottomless grave. A genuine desire to reclaim what the enemy has stolen from you and embrace your identity in Christ is a necessary step towards being set free from the chains keeping you bound to the anguish of the past and overwhelming worry that weighs so heavily on you.

From start to finish, Victorious gives listeners the rock edge that Skillet has become known for with songs that feature raw, open and honest lyrics that many can relate to all while directing back to our Savior as the One Who holds the key to finding the peace within the madness. With the majority of the project being produced by John & Korey Cooper, longtime fans, AKA Panheads, will be glad to hear the signature sound of pulsing guitar riffs & drum beats that drive the message of the songs home. Victorious features something for every listener and is a must add to your playlist!