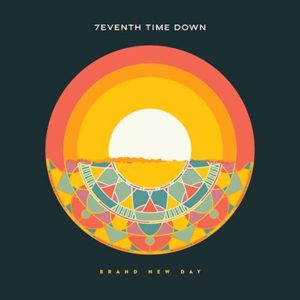 I’ve been listening to 7eventh Time Down since their first album, Alive in You, in 2011. I also wrote the review for their previous album, God is On the Move, in 2015. Needless to say, it’s been kind of neat watching them evolve musically and overall as people. Brand New Day is, again, something that is different than all of their previous albums. It seems that with each release they are testing the waters with new ideas and sounds they haven’t done before.  Personally, I think the majority of the songs at the beginning of the album are hits but I also feel like some of the later tracks are a miss. I have to give them kudos for going outside of their comfort zone though.

The album opens up with “I Have Decided,” an upbeat, joyful pop tune that makes you want to get up and dance. The song is all about declaring the choice to be a follower of Jesus. I think the song misses the opportunity to expand on what that really means, but does show that it’s important to make that declaration and hopefully follow through on that choice. It’s a great start to the album to get you pumped up to listen to the rest.

Towards the middle of the album, songs like “The 99” and “Trust” really resonated with me. Both are softer poppy songs but they both have great lyrics about the characteristics of God.

“The 99” reminds us of how God is passionate about us as an individual and how He would “search the whole world to find me” or you because He will do absolutely anything to have a personal relationship with us. The beat is mellow with a slight drum and clap melody and a booming chorus to drive home the message.

“Trust,” a slower and more toned down track features quiet vocals and soft tune with a harder hitting and uplifting chorus. The lyrics remind us of different times in the Bible that God has been there for His children like taking down giants and walking through fire. Although we’ve heard those stories over and over, it’s a fresh reminder of how He works things for His good, and all we have to do is trust in Him and His plan. Personally, I think this is my favorite track on the album and is one I will be playing often.

The album ends on a bust, in my opinion, with “Basic.” Ironically, I think the song is lackluster and pretty, well, basic. It has a cliché clap and drum beat and the lyrics are kind of wonky. They also throw a rap-like break down over a shrieking guitar solo that makes me cringe. I enjoy the shredding guitars sprinkled throughout the song though because it reminds me of their earlier music.

Overall, the album is kind of a typical Christian electronic pop album with the same kind of beats strung in every song. Although the songs contain some seriously important truths, I am really missing some of that harder sound from the early days of 7eventh Time Down. I also get a Toby-Mac wannabe vibe with some of the songs. With that being said, it is pretty interesting to see them branching out and trying new things with their sound, musically and vocally.

More from 7eventh Time Down: