Film Review: ‘I Can Only Imagine’

Home/Reviews/Film/Film Review: ‘I Can Only Imagine’
Previous Next

Film Review: ‘I Can Only Imagine’ 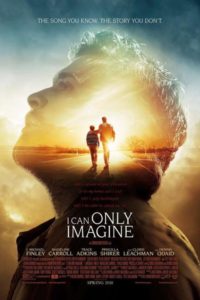 MercyMe’s “I Can Only Imagine” has affected countless lives over the years since its release. While many may be familiar with some of the story behind the hit that the band’s front man Bart Millard has shared over the years, the movie by the same name goes deeper as it dives into the tumultuous childhood and strained family relationship that fueled the song’s inspiration.

Bart is depicted as a wide eyed little boy with a big imagination and dreams to match. Dreams that are often put down by his father. Through these times, Bart often found solace and an escape in music as he used it to take his mind off of the violence surrounding his home life. In addition to music, one of the bright spots in his younger years was the tight bond he shared with childhood friends Shannon & Kent who remained close to Bart through high school.

We see Bart trying to gain his father’s approval by joining the football team. However, that doesn’t last long and soon Bart found himself involved with the school’s glee club. While he insists he’s not much of a singer, a caring teacher cultivates Bart’s true talent as a vocalist and trains him in the craft which ignites a new passion in Bart’s heart.

After graduation, Bart leaves his hometown to find his place in life which leads him to meeting his MercyMe band mates. Between touring & working hard to get their music heard, the band experiences many highs and lows as they struggle to get their music heard. When it all takes a toll on Bart, he decides to return home where he finds a very unexpected situation that unfolds into a story of forgiveness and understanding.

When God calls Bart back to music & the band, he finds journals from his younger days that inspire the words to “I Can Only Imagine”. This not only changed the career path for MercyMe, but also Bart’s life and so many others who have listened to the song.

Overall, the powerful message of forgiveness and never giving up on the dreams God has planted within you speaks volumes. You don’t need to be a MercyMe fan to appreciate I Can Only Imagine with its relatable characters and story that is sure to deeply touch the hearts of viewers.

Rated Rated PG (for thematic elements including some violence)

Links for I Can Only Imagine: