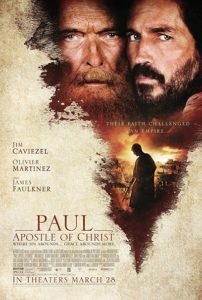 Set in Rome during the time of Nero’s reign when violent persecution of Christians was common practice, Paul, Apostle of Christ depicts the latter end of Paul’s life as he reflects on the many years he himself spent torturing and persecuting Christians before God dramatically changed his heart. After the encounter, Paul became one of the most influential and impactful missionaries of the time who lived fully for Christ, spreading the Gospel to many both in person with his travels and through letters once he was imprisoned.

Luke, a follower of Christ and mission companion of Paul, visits Paul in prison telling him of the cruel treatment of Christians he has been witnessing and how the Christian community in Rome are coping with the ever-present danger surrounding them. A mutual friend Aquila and his wife Priscilla are the leaders of the Christian community who look to Luke for messages from Paul to help guide their decisions and strengthen the faith of the people.

Luke encourages Paul to tell his story of how God changed his life and offers to write down the details of it as well as the missions they went on so there will be a record of them to last for future generations to read and be inspired by.

Even while imprisoned, Paul’s resilient and unwavering faith in God has a profound effect on the people he comes in contact with. At a pivotal moment, Paul & Luke have their beliefs challenged by the prison guard who refuses to back down on his own convictions.

Following his friend’s death, Luke continued to document Paul’s story so that his testimony could live on and reach the lives of many long after his physical presence on earth was gone. This documentation went on to become much of the book of Acts in the Bible.

Paul, Apostle of Christ is a powerful film with a message that is sure to speak to the hearts of viewers and also brings up good topics for discussion.

Rated Rated PG-13 (for some violent content and disturbing images)

Links for Paul, Apostle of Christ: