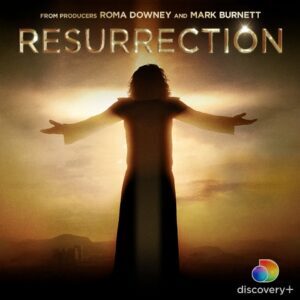 There have been many films and series made over the years that depict the life and death of Jesus Christ. Few, however, continue the story beyond the cross. Produced by Mark Burnett & Roma Downey, Resurrection follows their acclaimed series The Bible, Son Of God, and A.D. The Bible Continues.

Told from the perspective of Jesus’ followers and friends, the film takes viewers on an emotional visual journey as we witness the moments leading up to Jesus’ crucifixion & death, His resurrection and the days after as the disciples vow to carry the Gospel to all corners of the earth.

Following His death, we see those who knew Him best grieve the fact that their friend & teacher is no longer with them. They recall the words of Jesus & how everything He said came to pass; discerning whether they believe He will rise from the dead.

The followers are hunted by the Romans who think the disciples are a threat to the empire. Several in the group discuss whether they should flee or wait and see if Jesus’ promise is fulfilled. They agree to wait three days.

In a powerful scene on that third day – the ground shakes, an angel appears and Jesus triumphantly rises. While those who first saw Him alive once more at the empty tomb rush to tell the others what they had seen, not all of the disciples believe right away until Jesus appears to each of them. In their time spent together following the resurrection, Jesus prepares the men to tell others about Him once He returns to Heaven.

We see the followers receive the Holy Spirit enabling them to witness to everyone they meet as well as perform miracles, just like Jesus said they would. Through their mission, the disciples also experience being inprisoned and beaten for the message they preach, yet they refuse to deny that Jesus is the Son of God.

In the end, the family of believers continues to grow as more and more people learn of Jesus, His sacrifice and the new life found in a relationship with Him.

Overall, Resurrection adheres to the biblical accounts while bringing the words to life in a powerful and memorable way. You can watch Resurrection now streaming on the Discovery + platform.