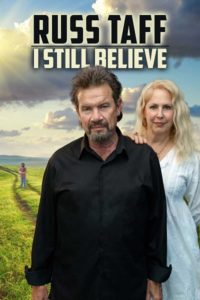 There’s a darkness that lurks in this world seeking to tear families apart and destroy lives. When that destruction comes, it can be a long, difficult road back. But, through the testing of faith and being dragged beyond what you ever thought you could bear, the flickering light of hope and power of God’s merciful love becomes the anchor that keeps you from fully fading into the black.

Russ Taff has been a part of the gospel music scene for over three decades first as a member of The Imperials then as a successful solo artist as well as part of the Gaither Vocal Band. Beyond the music, accolades and talent, Russ’s personal life has been rocky to say the least including battles with alcoholism, childhood abuse and hitting the bottom of the deepest pit that the enemy dug for him. With the documentary film, I Still Believe, Russ & his wife Tori share their most vulnerable and difficult moments as well as the hope and grace of God that saved his life on multiple occasions.

Throughout his rough upbringing with a father who was a pastor, though fought many demons including alcohol, and a mother who put a lot on Russ’s shoulders and at times became abusive as well, Russ found solace in music and faith in Jesus. When his parents left to move to California, Russ was taken in by the family of his English teacher, June Smedley. Living with the Smedley’s was the total opposite of what his homelife had been growing up. There Russ was surrounded by love and found a much more joyful time in his late teens through young adulthood. When he was 19, Russ met a woman named Tori who would change his life forever. Tori married Russ in their early 20’s and she remained by his side through his rise to music fame.

With his unique vocal talents and big personality, Russ helped gospel pioneers The Imperials reach a wide range of audiences all around the world. After a whirlwind ride to the top with the group, Russ went out on his own where he was able to grow even more as a solo act becoming a Grammy & Dove award winning artist. During this time, the Russ Taff that everyone had grown to love as they watched him on stage and TV, was turning into a different person once the lights went down. Russ Taff the man began dealing with depression, pain, emptiness and chose alcohol to numb those feelings. The lies that drinking led him to believe pulled him down quickly as Russ did all he could to hide this aspect of his life, even from Tori and others he loved most.

As the facade continued, Russ became a father to two daughters, ventured into the country music scene and searched for his place in the world eventually leading him to singing with the Gaither vocal band. Even then, lies kept growing as Russ’s alcoholism worsened. When Tori realized Russ was falling deeper, she felt betrayed by his secrets and stepped away as the affects further weighed on her, but she refused to give up on him. A time later, Tori organized an intervention which included Bill Gaither, Russ finally broke down and took steps toward treatment.

After 10 years of sobriety, when Russ’s father died, he experienced a relapse and returned to rehab to get clean again until his mother died. This sent Russ into a much deeper relapse that interfered with his family, his career and every relationship in his life. At its worst, the addiction drove Russ from his home, his wife, daughters and nearly cost him everything.

Russ went to another treatment center, but this time progress was made. At the end of the program, Russ experienced an encounter that drastically changed everything – for the better. This change was evident when Russ finally returned home to Tori and their daughters.

Russ Taff’s story is one that soared to the highest of highs and crashed to the absolute lowest of lows before finding the true redemption power of Christ and a loving Savior Who is faithful, has always been there and will always be when you open your eyes and let Him in.

I Still Believe is a moving and inspirational film that brings viewers inside the life of one of the most influential artists of modern Contemporary Christian Music. Russ and Tori are open, honest and unfiltered as they seek to tell others of the amazing work that God has done in their lives.