Film Review: ‘The Least Of These’

Home/Reviews/Film/Film Review: ‘The Least Of These’
Previous Next

Film Review: ‘The Least Of These’ 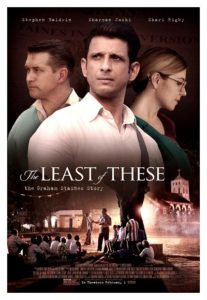 Everyone has something they believe in. When faced with a differing point of view we have the choice to stand firm in that belief or be swayed by the opinions of others. For some, when confronted with this difference they become fearful of what they don’t fully understand which can often lead to poor decisions and actions that have drastic and sometimes tragic consequences whether for themselves or those around them.

Based on true events, The Least Of These tells about the life of Australian missionary Graham Staines during his time in India where Christianity and converting people from their religion is highly frowned upon – even illegal under certain circumstances. While Graham works with several local people, many of them suffering from leprosy, he does his best to abide by the specifics of the laws within the country as he shares the message of God’s love with them. Young journalist Manav Banerjee is on a mission of his own to expose the Christian missionaries in a way that would have them arrested and charged with breaking the laws against conversion.

Banerjee’s prime motive is to provide for his young family though his drive to prove that laws are being broken begins to consume him. He is offered a job that calls for him to live amongst the missionaries and the people they are assisting and through this, Banerjee begins to doubt his own personal convictions but not before he insights an outside village group against the Christians which carries several ramifications.

Graham is portrayed as a smart, caring individual who seeks to help as many people as he can through providing medical treatment and skill training as well as sharing the gospel in a way that gently directs others to God if they so choose. In both life and death, his example is one that inspires many. After a tragedy occurs, Banerjee is faced with a decision to compromise what he knew actually happened during these events for his own personal gain or let the truth be known. The result of this choice becomes life altering to Banerjee.

For many of us, it can be easy to forget that there are places in the world where persecution of Christians is still prevalent. The story of Graham Staines’ life work presented in The Least Of These is eye opening as it shares a powerful message of forgiveness, mercy and remaining strong in your faith in the face of adversity.

Links for The Least Of These: