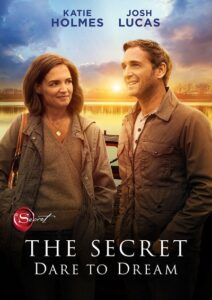 Perspective is a powerful thing. We all know that in life, there’s always good & bad and while we don’t have control over the circumstances, we do have a choice in how we respond.

Based on the bestselling book, The Secret, The Secret: Dare To Dream tells the story of how a shift in our perspective can reawaken hope. As a quote in the opening of the film reads: “There are only two ways to live your life. One is as if nothing is a miracle. The other is as though everything is.”
We see both of these lived out in the lives of the movie’s main characters, Miranda and Bray.

Miranda is shown as a hard working, widowed mother of three who does her best to make ends meet and provide for her family in New Orleans, Louisana.

Bray, a curious stranger comes to town with a unique perspective on life. Bray brings with him a mysterious yellow envelope that he is supposed to deliver to Miranda. When he arrives at her address, he meets her son and says he’ll come again.

After a seemingly random event introduces Miranda and Bray, he hesitates in giving the the envelope. Bray assists Miranda with a repair and shares his life philosophy with her family. This philosophy being – whatever you think about, you attract to you. In his mind, positive thoughts bring positive outcomes and negative will cause the negative.

Before he leaves, Bray decides to put the envelope in Miranda’s mailbox with a note explaining what’s inside.

Life (and its expenses) doesn’t slow down for Miranda, not even with a large hurricane churning towards their area. As the storm intensifies and makes landfall, damaging winds sends a large part of a tree through Miranda’s roof, which was already in need of replacing. Miranda’s mailbox, with the envelope from Bray still inside, is another casualty

As we learn more about Bray, the mystery of why he set out to find Miranda deepens and we discover that their lives are more intertwined than we originally knew. When the contents of the envelope is revealed, it changes Miranda’s life and ultimately, Bray’s as well.

The message throughout the film is one of maintaining a positive outlook and believing that even in the bad times something good can be produced. While it’s important to avoid getting stuck in a negative thought pattern that can drag you into a downward spiral and not allow you to see the blessings in life, as Christians, we also know God has a plan for our lives and as James 1:17 reminds us, “Every good and perfect gift is from above, coming down from the Father of the heavenly lights, who does not change like shifting shadows.” Therefore, it is not merely our own thoughts and abilities that brings about these good gifts and we need to acknowledge our Heavenly Father giving Him the glory. Overall, The Secret: Dare To Dream tells an intriguing story and is enjoyable to watch.

Rated: PG (for language and an injury image)

Links for The Secret: Dare to Dream: