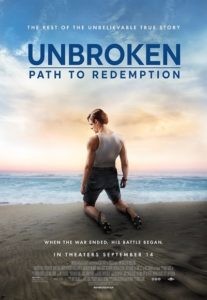 Based on actual events and picking up where the 2014 feature film Unbroken left off, Unbroken: Path To Redemption follows the story of Louis Zamperini. Once a celebrated Olympic athlete, Louis (or Lou as he is called by those close to him) served in World War II as a soldier who was reported missing and presumed dead until found and returned to his family after nearly three years.

Lou is faced with the vivid memories of his military plane being shot down and spending over a month at sea on a raft before being captured as a prisoner-of-war by the Japanese etched in his mind. He must learn to process all he went through while readjusting to life back home in California and travelling the country speaking about his experiences and encouraging the sales of war bonds to support soldiers as they try to make ends meet after returning home. This takes a toll on Lou’s mental state as he turns to unhealthy coping mechanisms when he is haunted by the images of those who tortured him while imprisoned.

Lou meets a young woman named Cynthia who captures his attention as the pair proceed to date and eventually marry. When Lou has difficulty finding a job, he returns to running and begins training for the 1948 Olympics, which is still a few years away. In running he finds relief from the demons in his mind, however, while training he suffers an injury which hinders him from continuing. Without the physical escape of being able to run, his nightmares return full force putting a strain on his relationship with Cynthia who recently discovered that she’s pregnant. Lou recognizes that he needs a better way to numb his terrors than alcohol, but the substance has already gotten a foothold – a fact that he attempts to hide from those around him.

Once their daughter is born, Lou is shown as a caring father, but the pressure to find a job weighs heavily on him. As Lou spirals further down the path of self-destruction, his personal life falls apart and he becomes a very hardened individual. Cynthia comes close to giving up on him, but instead she continues trying to help him. Lou’s brother Pete also serves as a voice of reason and encouragement to Lou as he looks out for him and tries many times to direct Lou to the assistance he needs.

When evangelist Billy Graham holds a revival in their town, Cynthia attends the first night and is so moved by what she hears that she asks Lou to go with her the following night. He goes but is reminded of painful memories of the past which causes Lou to leave in the middle of the service. After a conversation with Cynthia the next morning, Lou returns to the revival that evening where once again he is tempted to leave, but this time he is stopped in his tracks and finally opens his heart to what God is telling him.

With a dramatic change of heart, Lou does what once seemed unthinkable to him as he embraces forgiveness and the redeeming grace of a Savior. Lou turns his life around and follows God’s guidance into a ministry that has left an impact on countless lives and a legacy that will live on.

Overall, Unbroken: Path To Redemption is well-written and the actors do a wonderful job telling the stories of these people during this important moment in history. I also have to give credit to the way in which this movie was filmed. In addition to capturing the lifestyles & time that this film is set in, the depiction of Lou’s flashbacks are incredibly gripping and moving as they represent the war that still rages inside his mind and the battles he must fight every day. Of the many powerful messages within this film, those of never giving up hope and both showing & accepting forgiveness ring the loudest.

Links for Unbroken: Path to Redemption: