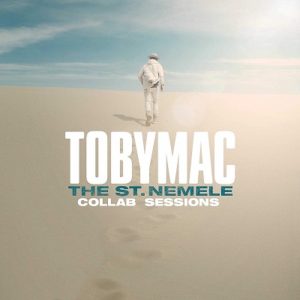 TobyMac has always found cool ways to reinvent his music having released several remix singles and albums over the years; each one making for a completely new listening experience no matter how familiar you are with the original versions of the tracks. I first reviewed The Elements album when it came out in October of 2018. With the release of the St. Nemele Collab Sessions not only do we have the musical treat of well-produced remixes of the songs from The Elements, we also get to hear TobyMac collaborate with several of today’s brightest stars of Christian music including Jen Ledger, Crowder, Bart Millard, Matt Maher, Cory Asbury & Jordan Feliz. For this review, I’ve pulled many of my original comments about The Elements album with additional statements about the St. Nemele Collab Sessions version of the tracks in bold type.

Title track, “The Elements”, appropriately sets the tone for the rest of the album as it tells of standing strong in our faith against everything this world tries to throw at us in an attempt to tear us apart. Much like the natural elements of wind, fire, water and earth that can vary from calm and serene to violent and dangerous, life mirrors these extremes at different times. However, there is ONE God Who holds it all and will be by our side in battle as we fight the elements we face. This track is incredibly interesting to listen to as it takes you on an epic ride. For me, it’s an almost cinematic experience making me feel that the story within the song could be turned into an action/adventure film. St. Nemele Collab Sessions: The Neon Feather remix and Jen Ledger’s guest vocals are a welcome addition to this version providing another layer of depth to the track.

St. Nemele Collab Sessions: “Hello Future (DJ Maj Par-T Side Remix)” – while I didn’t highlight this particular song on the original review for The Elements, the recording featuring Crowder tells a bit of a prodigal son story finding someone who has strayed away from their beliefs and found themselves in a hopeless state. After realizing that doing things their own way wasn’t working, they return to the Savior with a new outlook on life choosing to embrace the promise found in Christ, stepping into the future with optimism.

“Overflow” praises God for His provision, love and grace as He fills our hearts and spirits to overflowing. When we willingly walk with Him throughout each day and in every circumstance, He will give us joy, hope and peace that is unmatched by anything we can find on our own. St. Nemele Collab Sessions: The Willyecho remix lends a more rhythmic beat to this version while Bart Millard of MercyMe’s vocals add a joyful tone.

“See The Light” encourages those who are experiencing a difficult situation that seems unbearable to keep going. There is a promise of hope and path to the other side where a brighter day will dawn. St. Nemele Collab Sessions: The team up of TobyMac & Jordan Feliz on the RUSLAN remix of this track is fitting and makes it sound like this song was meant to be a duet to begin with. The lyrics remind listeners that even in the darkest night, there is hope for a new tomorrow. Being in the midst of a difficult season can be a challenging, lonely experience and it is so important to remember that you are not alone. Reach out to a trusted friend or family member and never forget that you can always talk to your Heavenly Father Who will not abandon you in your pain.

“Scars” sends out a message to a loved one who is going through a dark time and facing a new unknown. The sound advice carried within the lyrics help both the intended recipient as well as the listeners remember that we are never alone and we all bear the scars, whether seen or unseen, of events and obstacles we have battled. With our hearts and eyes fixed on Jesus, we know that we can depend on Him to carry us through the pain & trials we are sure to encounter. St. Nemele Collab Sessions: For the Neon Feather remix, Sarah Reeves makes a guest vocal appearance on a slightly slowed down version of this hit. The remix elicits an even more emotional reaction to the message within the song.

St. Nemele Collab Sessions: “Heart of My Beat”, the only all-new track and only one featuring TobyMac solo, closes the project giving all glory and honor back to God acknowledging that He is at the center of everything and where all life & creativity flows from.

The St. Nemele Collab Sessions offer a fresh and unique spin on these songs as it builds on the solid foundation laid by The Elements album. This collection features stellar vocal performances by all involved and clear indication that these tracks were inspired by our Heavenly Father. As I noted about the themes within the songs in my previous review of The Elements, each one is intriguing with uplifting beats alongside powerful messages of hope and encouragement that strengthen your faith.