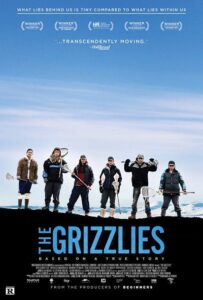 Based on true events, The Grizzlies tells the story of a group of high school students who overcome the adversity surrounding them to learn the value of teamwork, respect, giving your all and most of all – friendship.

In the small town of Kugluktuk, Nunavut, many teens and young adults struggle with the harsh environment and issues of mental health as well as pressure to provide for their families. Sadly, several young people turn to drugs and alcohol as their way to cope. With the highest suicide rate in the area and no sign of changing, the majority of the town struggles to keep any hope alive.

When Russ Sheppard, a school teacher sent to teach a History class he sees as his way of climbing up the ladder for his career, witnesses firsthand the hardships, abuse and desperate circumstances the kids in his class & the neighborhood are dealing with, he becomes determined to do something about it.
He decides to start a lacrosse league having experienced how much it helped him through college.

The kids are reluctant at first, but when they try playing the game, they discover it gives them motivation to try to turn their lives around. While many townsfolk rally behind the kids, for some, their own families disagree with how they are spending their time – even though playing on the team has deterred them from the drugs & drinking.

The kids develop a love and respect for the game of lacrosse, as well as for each other. Each having faced their own setbacks and seen horrible events in their lives, the Grizzlies team bonds and form a family of sorts.

As a tragic event occurs just before the team is set to go to play in the lacrosse national competition, Russ questions if he should have started the team in the first place while the Grizzlies grow even more close. Upon seeing how the team has come together to support each other, Russ realizes that playing lacrosse really has helped the kids not only start to change their lives, but his as well. Drawing from all they’ve been through motivates the teens to play their best when they face off against a tough team and in the end gives them more feeling of accomplishment than winning a championship ever could. As one character notes near the end of the film: What lies behind us and what lies before us are tiny compared to what lies within us.

Overall, The Grizzlies is a film about coming together against the odds, discovering a purpose and supporting each other through the most difficult trials. While the movie does have an R-rating and more intense moments may be hard for some to watch, the story itself and seeing how the characters grow and lives are changed throughout is very inspirational. As a bonus, we get to see the actual people who inspired the characters before the credits and learn how they have been working for positive change in their communities and beyond since being a part of the Grizzlies! The cinematography and acting are very well done. It’s also interesting to note that many of the actors are local to the region and it was their first movie. Highly encourage you to visit the film’s website, linked to the right on this page, and read about the casting process as well as more information that it has to offer about the story as well as the communities and culture of the area.

Conent advisory for parents and those sensitive to the topics: Parents should use caution in determining what age is appropriate for viewing. No extreme violence is shown on screen to speak of, however, we see people get hit and more is heard out of the camera’s view. The language is a bit rough at times, including the F-word being used when emotions run high. We do not actually see any suicides happen on screen, though two occur off screen and we hear about others.

Rated R (for language, and some drug/alcohol use involving teens)

Links for The Grizzlies: