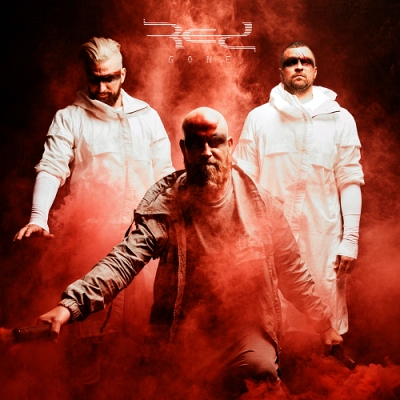 For nearly twelve years, the band RED has set atop the mountain of some of the most well-liked and successful Christian rock bands. When I received a pre-release of the band’s debut record End of Silence in April 2006, there were only a few rock bands around who had managed to stick out in Christian music. Pop music was all but dominate on Christian radio, and so RED managed to offer hope for the genre in terms of the heavier and edgier music that so many of us wanted to hear. Aside from Skillet and Pillar, the Christian rock scene was pretty limited and I believe End of Silence really started a movement of incredible rock records that would begin to hit the Christian music market in the years to come. By the time the band released their follow up Innocence & Instinct in 2009, RED had already amassed an impressive following of fans that were excited to finally have a powerhouse mainstay in rock music.

In 2017, over eleven years from the release of End of Silence, RED brings us their sixth studio album, the much-anticipated offering, Gone. Gone also kind of came out of nowhere. The band only announced it about a month before it released, and though many fans were excited about its release, the band’s label (Essential Records) didn’t do much in helping to promote it ahead of its release other than a brief bio-style press release. I had the opportunity to interview the band’s bassist Randy Armstrong a week and half before the release and for the first time in a great while, I actually interviewed an artist about a record that I had yet to hear. That was due to the influx of pirating and leaking of pre-releases that left the label with a decision not to even send it out for review until its release, hence on the late review here. Music thieves: you stink!

I wrote the review for of Beauty and Rage in 2015 and even went back to listen to it before listening to the new record to try and have a contrast of comparison between the two.

The album starts out with the track “Step Inside, the Violence”, which in many ways sounds much like the edgier rock numbers we’ve seen from RED over the years. The band manages to keep the orchestration a part of the opener, but adds more of an electronic element to it, with a message inviting listeners to what will become the record.

The following two tracks, “Still Alive” and “Losing Control” were the first singles and really the only taste of the album that emerged prior to its release, and many believed these tracks would actually hint to the rest of the record, but surprisingly these two were probably the heaviest offerings from Gone, along with “Fracture” later on.

The message behind “Still Alive”, according to bassist Randy Armstrong, is the band questioning the future of RED and in the mean time making a proclamation publicly that whether the band’s journey continues beyond it, they’re “still alive” and willing to see where the next path leads them. Of these two, “Losing Control” is probably my favorite track of the standard edition of Gone, offering fans the kind of sound that we’ve heard record after record from these guys.

The title track “Gone” is one of the tracks that offers listeners the more electronic sound mentioned before, and though somewhat different from previous songs, this song features a dubstep/remix element that actually has a natural feel. At first I was like “this isn’t RED”, but after a few listens, the track kind of grew on me. It’s one that questions the future and legacy of what RED leaves behind. I think the fact that the band steps outside its comfort zone with this one shows that after 11 years of the signature sound, it’s actually cool to hear a side of the band we’re not used to.

“Coming Apart” is the ballad of the record, similar in vein to some of the other softer numbers from the band such as “Pieces” (from End of Silence) and “Not Alone” (from Until We Have Faces). It’s also one of the most message rich songs on the record proclaiming the Lord “as the One thing I can’t lose”.

Continuing on with the different sounds found on Gone is “Unstoppable”, which while heavy at some moments, has more of a pop vibe to it.

The standard edition ends with the track “Singularity”, which touches on the subject of artificial super intelligence and it overrunning the human race eventually. This is true of today’s society. We can attribute this to creating gods and the consequences of doing so. It’s the leaving out of the Creator God that can lead to such destruction. A fitting end to a record full of questions. A heavy ending to the new record, reaching the pinnacle and asking the ultimate question “What have we done?”

The record’s overall message is one of deep questions we often ask in life. “What is the meaning of life?” and “What will my legacy be when I’m gone?”. These are all questions as human and created beings that we have from time to time.

One thing I did notice about Gone compared to its predecessor in 2015’s of Beauty and Rage is the overall message and theme is a bit more positive. Whereas of Beauty and Rage was probably the darkest waters the band has sailed, Gone offers a brighter light, and a message of hope through the questions of life and seeking God for those answers.

While the band continues to play it safe from a message stand point offering a more neutral outlook lyric-wise, they have always been up front that they are not a praise and worship, in-your-face preachy group, rather using a more poetic and allegorical approach. Having spent time with these guys in person, their faith in Christ still plays a role in the fabric of their music and Gone continues to be evidence of that.

In closing, Gone was a far cry of what I was expecting from RED. After all, I consider of Beauty and Rage their magnum opus and I really felt it was going to be an Everest to climb to hit that peak, but for what it is, I still think even the most loyal of RED fans will find something to like about Gone. The question remains to many fans is, now that the band’s record deal is up, is this the last we’ll hear from these rockers? I hope not, but only time will tell.

The Deluxe Edition of Gone also includes seven additional (and digital exclusive) tracks, with three more originals along with 4 remixes of songs from the record.